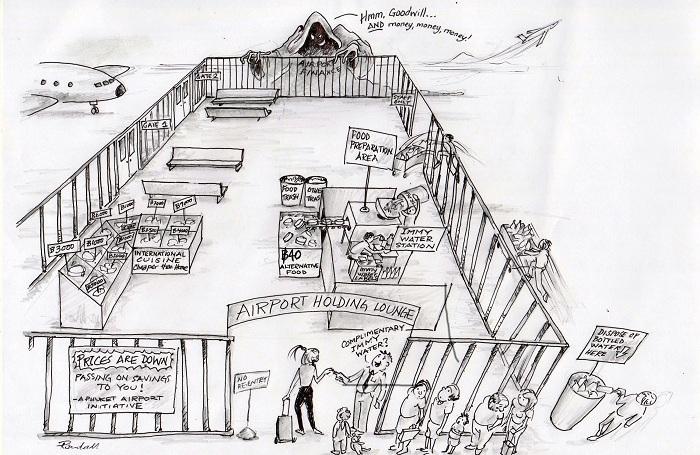 PHUKET: Although it took years to act, the Ministry of Commerce is to be commended for finally ordering an end to blatant overpricing on the most basic of consumer goods at Phuket International Airport: food and bottled water.

As so artfully pointed out by the airport’s chief financial officer, high prices for consumer goods at airports is hardly a phenomenon restricted to Phuket. Overpricing at airports around the world is probably one of the few truly global travel standards.

Along with security checks by Customs and Immigration officers, long check-in lines, inevitable flight delays, notoriously poor airline food and so on, airport pricing rip-off are just one of many negative elements that conspire to make modern air travel such an unpleasant experience, even to the extent that it becomes easy for us to forget what a modern marvel commercial aviation really is.

But the situation at Phuket Airport was far worse than the global standard. ‘Price gouging’ refers to a short-term spike in prices due to a temporary imbalance between supply and demand, such as the sudden high price for roses on Valentine’s Day. But charging four times the market cost for a bottle of water, which is what was going on at Phuket International Airport year round, is a different matter entirely. It was chronic, blatant and grossly unethical.

From the moment arriving passengers hit the Immigration queue, their experience at our dishonorable airport often becomes a shakedown – literally and figuratively – that continues, for many, right through their taxi ride to wherever they’re going here.

But now that Immigration has its free ‘Immy Water’ to remind tourists not to overstay their visas, we hope they will flood the airport with the stuff, thus killing both overpricing and overstays with one stone.