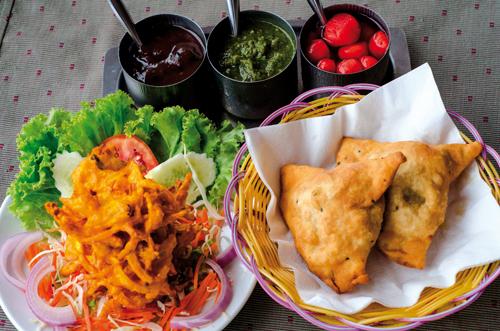 PHUKET: Given that Phuket offers very little in terms of flavors from the sub-continent, we pounced on the opportunity to try out one small Indian restaurant recently discovered by a couple of friends way out in Cape Panwa.

Only a stone’s throw away from the city center, Cape Panwa seems like a parallel universe compared to the rest of Phuket. Except for a few low rise hotels, the look and pace of this area is still very much 1980s lush, windy roads, sparsely populated countryside, roadside banana stalls and families in Saleng (motorized three wheelers).

Situated on highway route number 4129 (Sakdidet Road), about two kilometers from the Phuket Deep Sea Port, and right across from Radisson Blu Plaza Resort, Curry Night restaurant feels unassuming and homely. Its top-floor terrace setting is open-plan and can accom- modate as many as fifty customers at any one time, and according to Anita, the restaurant’s manager, the place can be busy during the high season. Regulars, my freinds and I were told, were well represented by staff and guests from the hotels nearby. During our visit on a Saturday, we spotted a large family with children quietly enjoying their meals there.

A member of our group, who seems to believe herself well versed in Northern Indian food, took charge of the ordering at once. For drinks, a Lassi is an absolute must – it’s a slightly sweet and refreshing shake made from ripe mango and homemade yoghurt.

Starters came in the form of gold-colored Bhaji, or fried onion rings and Samosas – a triangular pastry filled with spiced vegetables. Curry Night offers three types of fillings for samosas: vegetarian, lamb or paneer – a kind of cheese curd, very popular in India, which they make on site. Both Bhaji and Samosas were served with two dipping sauces; chili and tamarind chutneys.

The former is made from grinding together bright green chili, mint and coriander leaves, and has quite a kick to it (think spicy Italian pesto). Green chutney proved a roaring success with the Thais while foreign friends loved the milder, sweet and sour tamarind version.

There were also bright red pickled shallots on the side that, when eaten with above snacks, take away any hint of oily aftertaste that often accompanies anything deep-fried.

Then, in a true Indian pick n’ mix fashion, using our fingers, we tucked into the mains made up of a delectable variety of curries: lamb Vindaloo, Sag chicken (a bright green curry sauce made from spinach), prawn Masala, Aloo Gobhi (potato and green peas curry), and Bombay Aloo (spiced potatoes).

To accompany the curries, we selected a briyani which was beautifully presented (saffron rice with potato and peas) and for breads we chose Chapati, and plain and garlic Naans. The breads were baked freshly in Curry Night’s authentic Tandoor oven and were light and crispy.

Manager Anita working together with chef Soniya ensures that their creations remain as close to the authentic Indian flavor as possible. Prior to Curry Night, both of them have had plenty of culinary experience working in Indian establishments. The restaurant orders its spices from the Indian market in Bangkok, only a small batch at a time, said Anita, because spices tend to lose their fragrance very quickly.

Meat like chicken is sourced from halal butchers around Phuket, and the lamb is imported; but the chef and Anita select their seafood from the fresh market in town.

We have found most dishes to be excellent, except for lamb Vindaloo, which didn’t have quite the kick associated with this type of curry. But then it was our mistake for having ordered it “medium hot”. The sauce was however, excellent, while the lamb almost melted in our mouths.

Lunch for six including drinks of Lassi came to about 3,000 baht. In all, it was a very satisfying meal in a relaxed ambiance. We will surely come back, determined to sample what we missed out on that day: butter chicken, lamb Rogan Josh and the famous Tandoori chicken.