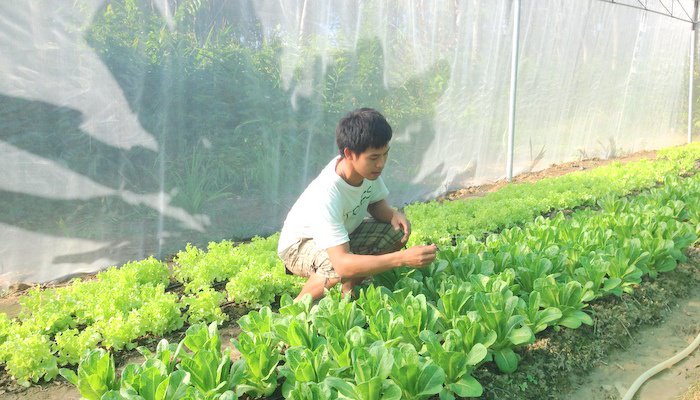 PHUKET: Garbage disposal is a major issue for Phuket. Every day the island produces 800 tonnes of waste of which 60 per cent is wet waste.

This issue must be solved, but merely increasing the capacity to dispose of it is not the answer. If the community is to have sustainable growth, then all that waste has to be managed.

Tiwat Phuengrang, a young Phuketian whose family has been living here for over 60 years is contributing to the solution. He has convinced his family in Pa Khlok – agriculturalists all – to pioneer a brand-new organic farm.

The family originally came to Phuket to work on the tin mines and with the mines’ demise his father established a farm on which he raised shrimp, and cultivated bird nests along with local herbs and fruit.

Meanwhile, Tiwat, who had attended the Princess Mother School Phuket and subsequently developed a strong interest in biotechnology, then studied at Thammasat University in the faculty of Science and Technology.

On returning home, he was not keen on taking a normal job but instead preferred to try something new, such as organic farming.

His father was initially reluctant, but decided to back his son at a time when the family shrimp farm business was declining.

Tiwat started by making his own compost and constructing a greenhouse in which he planted his first 4,000 heads of lettuce.

He tested growth techniques and long-term market capacity fluctuations so that his organic farm could be a business model for others.

“I have to try so I can understand what’s going to happen in the process of organic growth. I need to learn the most efficient ways to produce organic crops which are good for people’s health,” Tiwat explains.

“In general, the normal focus is on marketing and using chemicals and I don’t like it.”

In the long term, his strategies will help to reduce the amount of waste sent to the incinerator.

Reduction is a secret for the future, and Tiwat is an excellent example of what can be done by an individual who believes in a sustainable future.

Tiwat and I are both young Thais who can see the need for change and the need to convince our families to change with us so that we can look after them and our community in the future.

It’s a very exciting time to try something like this and to help resolve issues that are so important to our environment. And it’s our duty to keep Phuket a sustainable place to live.

Just try to imagine what it would be like if there were no incinerator, or if it broke down. Phuket would turn into a huge rubbish heap.

We have to address this matter and I’m really happy seeing a new generation working so hard to solve the island’s waste-disposal problems, and more importantly improving people’s health and well-being through the consumption of organic food.

Island Fever: Life on the road