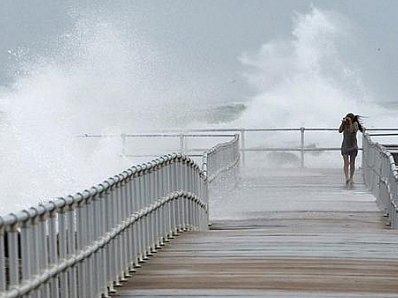 Romney told supporters in Pensacola that Obama was focusing his campaign on small things, and vowed to win the election, to chants of “10 more days, 10 more days.”
“Look into the future and see the debt that’s being amassed and ask, ‘What is right for America?’ This is a time of big choices, of big consequence. It’s a big election,” he said.

Obama spent the day in New Hampshire, whose four electoral votes could make a difference in the tight race.

“Ten days, New Hampshire, 10 days and you’ll be stepping into a voting booth and making a defining choice about the future of our country,” the Democratic president told about 8,500 people in a speech criticizing Romney’s record on taxes and fees as governor of Massachusetts.

New Hampshire is known for its low taxes. Many of its residents moved away from Massachusetts to cut their tax bills.

Both campaigns were keeping a wary eye on Hurricane Sandy, which threatened to slam into the eastern third of the country tomorrow or Tuesday with torrential rains, high winds, major flooding and power outages.

Romney cancelled a trip to Virginia, scheduled for tomorrow, when the state is expected to begin feeling the impact of the approaching storm.

Obama rescheduled his departure for Florida to tomorrow morning (Phuket time) because of the storm.

“We’re closely monitoring the storm and will take all necessary precautions to make sure our volunteers and staff are safe,” Obama campaign spokeswoman Jen Psaki said. “We can’t predict … how the storm will impact local communities.”

Eager to avoid any complaints that campaigning distracts from handling a potential natural disaster, the White House pointed out that Obama was briefed about Hurricane Sandy on board Air Force One as he travelled to New Hampshire.

Obama and Romney are in a late sprint to ensure that their supporters get out to the polls and to win over the dwindling pool of undecided voters in the eight or so battleground states where the election will be decided.

They remained in a statistical dead heat on Saturday in the daily Reuters/Ipsos online tracking poll. Obama led Romney by 47 percent to 45 percent, within the survey’s credibility interval.

The U.S. election is not a true national poll, but a state-by-state contest in which 538 electoral votes are divided among the 50 states and Washington, D.C., roughly according to population.

With the majority of states solidly either Republican or Democratic, the fight for the “swing states” not firmly tied to either party is critical.

This year, there is a possibility one candidate could take enough states to win the electoral vote – and thus the White House – while trailing in the nationwide popular vote.