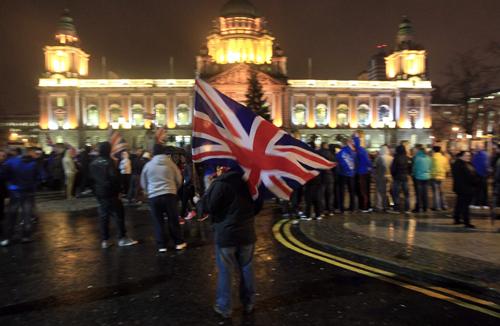 PHUKET: Police in Northern Ireland came under attack for a fifth straight night yesterday as the province’s police chief urged politicians and parents to act to halt the riots on Belfast streets.

The violence is some of the worst in the British-controlled province since a 1998 peace deal ended 30 years of conflict that pitted Catholics seeking union with Ireland against security forces and Protestants keen to remain British.

The unrest was triggered by a decision by Belfast city council – which is dominated by republican members – to end the century-old tradition of flying the British flag from City Hall every day.

The council met yesterday for the first time since taking the decision last month and a protest passed off peacefully outside City Hall.

But later, in an eastern part of the capital where rival Protestant and Catholic communities live side by side, a crowd about 200-strong threw petrol bombs, fireworks and paint bombs at police who responded with water cannon.

Northern Ireland’s police chief appealed to political organisers and parents of youths involved in the violence – some of whom were as young as 10 – to rein it in.

“As chief constable I’m taking the unusual step of calling directly now for protests, if not to be ended, to take a step back, for the violence to come to an end and for responsible voices to be heard,” Matt Baggott told a news conference.

He said members of pro-British militant groups, who ceased hostilities in recent years, were exploiting and in some cases instigating the riots.

Militant Republican groups, responsible for the killings of three police officers and two soldiers since 2009, have so far not reacted violently to the flag protests.

Some 3,600 people were killed during 30 years of sectarian violence in Northern Ireland before the 1998 peace agreement.

World News: US doesn’t rule out removing troops from Afghanistan