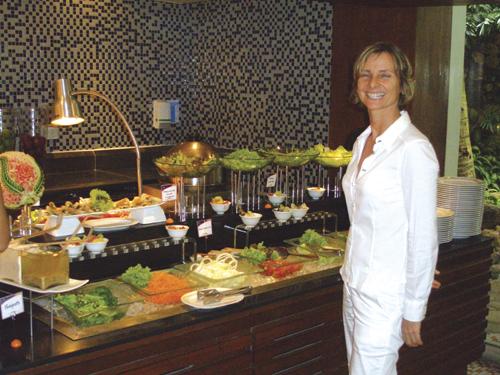 PHUKET: Brunch Upon a Time… for many of us living in Phuket, Sunday mornings were largely an unconfirmed rumor. Many of us who grew up in the seventies used to emerge from a standard Saturday night Bacchanal around two o’clock the following Sunday afternoon, wolf down some left-over pizza and whatever hadn’t been drunk the night before and collapse in front of the TV.

Such were the rigors of Western life during the seventies and it was a system we would have quite happily continued, had it not been for a revolution in society that brought with it such worrying innovations as teeth whitening services, SUVs and something called BRUNCH.

Time wipe to 2012 in Phuket, where we’re in the midst of a social revolution to adopt all things fashionable, in order to accommodate all those well-heeled visitors and millionaire retirees who are flocking to our shores. “Brunch” is one of these.

Brunch is a word that immediately arouses suspicion…. one of those schizophrenic, made-up terms, that can’t quite decide what it wants to be… somehow untrustworthy, precious and well, just not English.

“Doing brunch” is now at the forefront of Phuket’s social groundswell and, reeking of lazy decadence as it does, tends to feature an endless array of world-class food, hot tropical breezes, stunning views, cool music and copious supplies of naughty libations.

How did all this start?

Long-time Phuket resident Bruce Stanley recalls, “The mid-1990’s was the Dark Ages of international tourism when it was very challenging to find western style foods outside the five star resorts. It was impossible to buy butter, coffee and cheese except at a little store, Sin & Lee, in Phuket Town. As the number of expat managers of resorts, dive operations and tour agencies expanded, so grew the demand for places to eat well and socialize.

“The enterprising GM of what was then the Sheraton Grande Laguna Beach, John O’Shea, developed the island’s first sumptuous Sunday brunch at the waterside Bird of Paradise restaurant. The event was an immediate success with hungry westerners lining up to enjoy the haute cuisine only found every Sunday for brunch. While the offering of cuisine was extravagant, the added bonus was the opportunity for the major players and their families in Phuket’s early years of international tourism to get together and enjoy each other’s company outside of the workplace.”

As with so many things trendy and innovative, one has to look no further than the cool minimalism of the Twin Palms Resort on Surin Beach to understand the commercial growth of brunch. In the early Noughties the Oriental Spoon launched their own Sunday brunch with a welter of jet-fresh cold water oysters, Alaskan crab claws and a cascading chocolate fountain.

Through some savvy marketing, brunch at Twin Palms rapidly became the island’s premier people-watching venue, as rumors swirled around of Mick and Paris sightings and apocryphally of Pete Doherty falling asleep face-down in a salad bowl. The island’s glitterati flocked to Twin Palms to discover what this growing phenomenon was all about.

The resort’s General Manager Olivier Gibaud says, “We were able to establish our Sunday brunch as THE place to see and be seen when you visited Phuket, or if you lived here. We saw this socially-focused event as a fantastic opportunity to drive the appeal of our brand and so we we’re at pains to make it successful.”

Success always breeds “the sincerest form of flattery” in Phuket, and soon there was a clamor of brunching spots fighting for the attention and patronage of the island’s growing brunching fraternity, each one attempted to get a leg up on its competitors.

While Twin Palms was undeniably cool, another dimension of brunching became family-friendliness.

“Sail’s brunch at the Hilton Arcadia positions itself as ‘the family-friendly’ place to brunch, with wandering clowns offering face-painting and balloon twirling as a jazz band blows riffs by the pool. The Mangosteen Resort also offered a very family-friendly ambiance with a low price of entry and the use of all the resort’s pools and waterways for the kiddies. And Two Chefs differentiated themselves by starting the weekend early, offering a Saturday brunch with a free-flow Carlsberg beer option for their many Scandinavian loyalists.

Clearly location is a determining factor in winning the ‘brunch wars’ on a tropical island and the terrace at the Royal Meridien Yacht Club on Nai Harn Bay at one time proffered the ultimate ocean views. Since the demise of that particular brunch, Trisara has snagged the gong for superlative views. The resort’s genial GM Anthony Lark explains:

“When we decided to offer a brunch in March 2011, it was all about quality not quantity. We didn’t want to compete with the ‘all-you-can-drink cheap wine brunches’ and we knew with a little live jazz in our intimate beachfront location, this would be the perfect place for a lazy Sunday gourmet experience.”

One of Phuket’s most expensive and indeed expansive brunches is at Indigo Pearl, where sitting amidst their cutting edge machine-techno design, you might say brunch is a “riveting experience”. Whatever the puns, they offer an extravaganza, including unlimited champagne and wines with your meal, clearly designed for the true libertines among us who fancy pushing the Sunday boat way out to sea, while surrounded by our supermodel girlfriends and sundry visiting aristocrats.

The bottom line is “you pay your money and you take your choice”. But from a standing start a few years ago, when anyone who said the word “brunch” in Phuket would have been thought to have a speech impediment, to today’s booming range of options, we can celebrate our good fortune in having so much choice in so many wonderful and varied locations.

Let there be brunch!