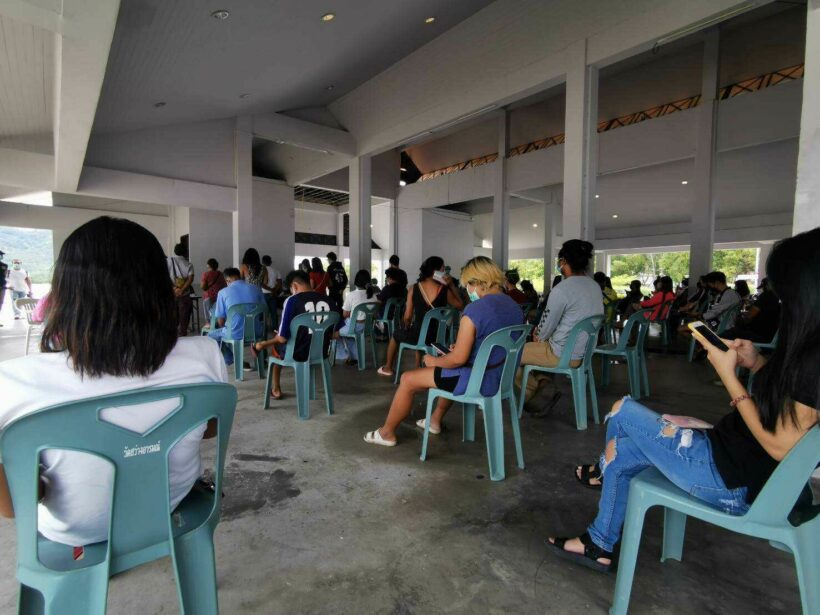 Koh Samui is not accustomed to Covid-19 worries and has been rocked by the outbreak this week as many locals struggle to cope with the first significant cluster on the island. So far 40 Covid-19 infections have been identified from the Black Bamboo Club cluster, and several other seemingly unrelated infections had popped up also. A few more bars have been added to the contact tracing list as possible spreader locations including Old School Bar and the Ark Store – referenced but not named in our reporting yesterday after the sudden closure for “renovations” as news of the outbreak broke.

Some residents who had not had to face a real risk of infection until now were spooked and stressed. Posts in Thai Facebook groups, some from the very people at the club and waiting for Covid-19 test results, started suggesting Samui be sealed off.

A 30 year old Thai woman confirmed to be infected with Covid-19 snuck out of the hospital and off the island in a car with a man and 2 other women and attempted to flee to their home in Songkhla. They were apprehended at Donsak Pier on the mainland and moved to a hospital there, but questions were raised about the fallout for the ferry and the staff that were exposed to the infected fugitive and what effect that may have on transportation on and off the island in the immediate future.

Police at Donsak Pier stop a woman with Covid-19 escaping Samui. (via News 7)

600 people were tested yesterday and one Koh Samui resident who visited the testing site today after being exposed to several people who frequent Black Bamboo club estimated about 500 more people in attendance today. The resident said they were told that the results would be returned tomorrow.

Many have suggested that scared locals who hadn’t felt at risk for Covid-19 on the quiet island before took advantage of the free testing and flooded the testing site across from Central Festival on Chaweng Lake regardless of whether or not they had attended Black Club or were at known risk of exposure.

Koh Samui has spent the last year and a half quietly sheltered from Covid-19 infections as a result of its island location and easy to control ports of entry. Coronavirus was a national problem, but locally infections were few and far between, with whispered rumours that anyone testing positive was being whisked off the island quietly to the mainland for treatment in Surat Thani.

Many only wore masks for the occasional chain store like 7-11 that followed national regulations, and even those who did mask up often considered it more of a gesture to show support for the greater good of Thailand than as protection from an actual local threat of infection.

A lot of residents grumbled when bars and clubs shut down even though there was essentially no infections on the island and numerous businesses quietly flouted Covid-19 restrictions to serve customers and maintain a semi-normal life during the pandemic. So when a club that has been open more often than not during restrictions became the epicentre of a Covid-19 outbreak, Samui residents were completely blindsided, their assumed bubble of safety suddenly burst.

It remains to be seen if the local population accustomed to safety from the Covid-19 pandemic other parts of Thailand suffered so greatly from for so long will be too conditioned by their lifestyle or be scared straight by the outbreak and take strict safety precautions to curb the viral spread.

vlad
17 hours ago, Leeshard said: You’ve rather missed the point. They aren’t going to stay off the roads because we all have essential journeys to make. But they’re totally sanguine about 30 road deaths a month but go into a…

AussieBob
2 hours ago, billybob said: Yeah I'm a big fan of Chris but I don't buy his excuse - he has the funds and the motivation to go elsewhere so he's bailing out but who can blame him. I'm not…

Poolie
On 7/31/2021 at 2:27 PM, Leeshard said: The article doesn’t mention anybody actually being hospitalized and certainly not dying on Samui because they contracted covid. Nevertheless everyone seems to be panicking. Why aren’t they panicking about the number of road…

TiT
Paddy is thinking about leaving back to the UK as well.  Chris likely had a word with him before he left and told him its going to get a lot worse before it gets any better.  The university excuse for…

billybob
39 minutes ago, TiT said: Paddy is thinking about leaving back to the UK as well.  Chris likely had a word with him before he left and told him its going to get a lot worse before it gets any…