Laotian rescuers are continuing their search for 131 missing people. They have been missing since Monday’s fracture of the banks of the Xe Pian Xe Namnoy hydropower dam causing devastating floods to villages in the southern Laos province of Attapeu.

The Laos PM Thongloun Sisoulith says, “Impact of this flooding is enormous.”

The Vientiane Times is reporting that the disaster has left 3,060 people homeless. It’s also reporting that those who sought shelters on rooftops and trees have now been rescued by Tuesday evening.

Officials say that vulnerable people such as children and elderly people were swept away and were unlikely be able to help themselves, adding that the assumed 19 or more deaths were included in the 131 missing victims.

Rescuers are battling with decreasing water depth, which is hard for boats to travel to reach areas.

Aid reliefs such as food and clothes are urgently needed to help the victims who have been temporarily sheltered at various locations, PM Thongloun was quoting as saying.

“The rescued villagers have undergone health check-up and provided with basic needs,” he said. 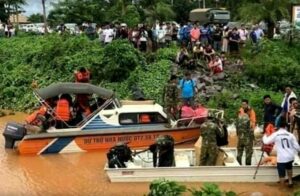 Meanwhile rescue teams from Laos, Thailand and China have been rushing to help survivors and search for signs of the missing. The Sanamxay district in Attapeu province has been the hardest-hit by devastating floods unleashed by the collapse of a hydropower dam.

It quotes local officials as reporting that at noon on Wednesday, over 80 rescue personnel from Water and Dive Rescue Thailand Club and Hook 31 (Nakhon Ratchasima) of Thailand with rescue boats and essential assistance items passed through the Vangtao-Chongmek border checkpoint in Champassak province. They are contributing to efforts to search for the missing.

Meanwhile, over 30 rescue personnel from China have already registered with local officials to assist flood victims and search for the missing.

Japan has provided essential equipment to assist the victims. Meanwhile, a medical team from South Korea was also on its way to Laos, the paper said.

DoubleTree by Hilton Penang invites you to Malaysia's culinary capital