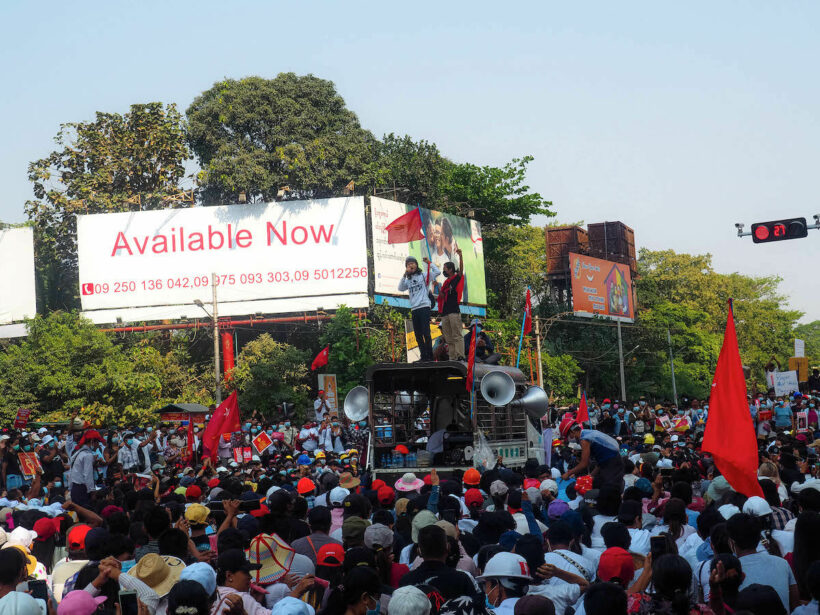 Protesters gathered at the heart of Yangon to demonstrate against the military coup in early February 2021. | Photo by The Thaiger.

A year ago today, Myanmar’s military seized power of the government over what they say was a fraudulent election. The democratically elected State Counsellor Aung San Suu Kyi was ousted and detained, as well as other civilian leaders. The coup was met with backlash from the public, leading to a bloody crackdown by security forces that killed more than one thousand people. And a number of journalists, students, artists, activists, civil workers, and lawmakers were arrested for defying the military junta.

Footage of the coup unfolding was actually captured by a fitness instructor who was shooting an aerobics video. Behind her, SUVs and armoured videos could be seen driving to the parliament building to seize the power of the government and arrest Aung San Suu Kyi and President Win Myint as well as other civilian leaders under the National League for Democracy.

When the military-owned Myawaddy TV announced the coup, the news presenter cited a section of the 2008 Constitution that authorises the military to declare a national emergency. The coup followed claims from the military proxy party, the Union Solidarity and Development Party, that there were ballot irregularities during the November 2020 election. The Suu Kyi’s party won in a landslide.

The majority of the NLD lawmakers and leaders, who had won at least 397 out of 476 parliamentary seats in the November 8 election, were arrested.

Mass protests erupted nationwide standing up against the military regime, calling for democracy and demanding the release of State Counsellor Aung San Suu Kyi, President Win Myint, and other civilian leaders. As a symbol of resistance against the military junta, protesters held up the three-finger salute, taken from the movie and book series the Hunger Games. The salute has also been widely used by pro-democracy protesters in Thailand.

To hinder communications amongst protesters, the military junta ordered the internet to be shut down and social media platforms, including Facebook and Instagram, to be blocked.

Security forces used high-pressure water cannons, rubber bullets, and even live ammunition to disperse protesters. Over the past year, around 1,503 people have been killed by security forces, according to the Assistance Association for Political Prisoners, but those are just the deaths confirmed by the activist group.

The activist group says 11,838 people are currently in detention including two children who have even been sentenced to death.

Since the start of the coup, the United Nations has taken a firm stance against the military’s actions. The Association of Southeast Asian Nations, or ASEAN, also started holding talks early on. A number of foreign ministers have urged the junta to release the detained leaders and to end the violence. Sanctions against military leaders were imposed by the US and the European Union.

Thailand has kept fairly quiet on the situation, the foreign ministry has said it was “gravely concerned” with the violence and causalities following the coup.

There are more than 18 active ethnic armies, most occupying border regions. A number of armed groups had signed a ceasefire agreement with the state military, but some broke the agreement following the February 1 coup. The prominent armed wing of the Karen National Union has taken a strong stance against the military takeover and clashes along the border, with some villagers in Thailand reporting bullets on Thai soil and the sound of explosions.

The National Unity Government, a shadow government, was formed after the coup along with its armed wing, the People’s Defence Force. The rebel troops are being trained by the Kachin Independence Army, which has also clashed with state military forces.

In September, NUG urged ethnic armed forces to start targeting the military junta and its affiliates immediately in order to construct a long-term federal state, adding that the international community would recognise the attack as a “just and fair revolution.”

As today marks the first anniversary of the coup, activists have called for a “silent strike,” with citizens staying at home between 10am and 4pm. Toward the end of the strike, people will clap or smash pots, a traditional act to drive out evil spirits which is frequently used as a form of protest against the military. However, in an attempt to quell any protests on this yearly day, the military junta has threatened sedition charges on individuals who close their businesses or even clap and bang pots.

Napapon
It’s been a year since Myanmar has done this. In my opinion, I just feel sad for them that they doesn’t have any freedom. Nowadays, everyone should have freedom to do whatever they want to do but not in Myanmar.…