Myanmar’s ethnic Mon civilians continued pouring across the border into Thailand yesterday, fleeing from the fighting between Burmese troops and rebels on the border near the western province of Kanchanaburi.

The fighting began on Wednesday morning in Myanmar’s Bo Yeepun village, about 2km from the Three Pagodas border pass in Sangkhla Buri district. More than 700 people have fled so far. The fighting died down Wednesday afternoon and all was quiet overnight, according to birder officials. But civilians continued streaming across the border yesterday.

The Bangkok Post reports that there were 447 Mon civilian refugees sheltering at Wat Tao Than in Sangkhla Buri, visited by Kanchanaburi’s governor, together with the commander of the 9th Infantry Division. They were led by Red Cross officials to distribute rice and other food

Another 117 Burmese said they wouldn’t stay at temporary shelters, worried about their belongings and wanting to get back home.

The fighting occurred after Burmese troops claimed that two houses near the Bo Yeepun stronghold were encroaching on government territory. The Three Pagodas border pass has been closed since the fighting erupted and authorities are preventing Thais from crossing over. Shops around the border have been also been closed since Wednesday. 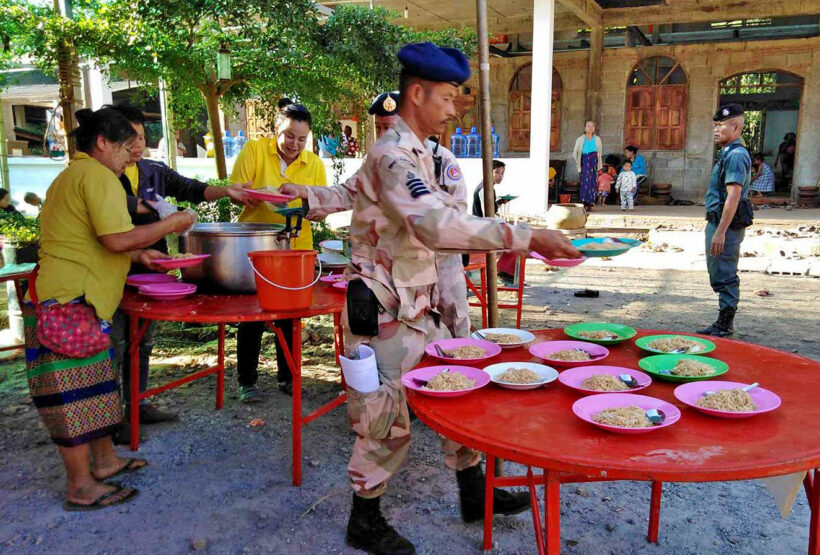