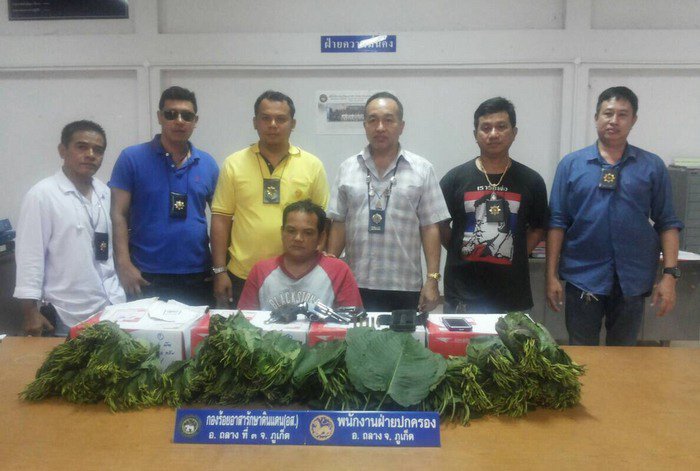 The confirmation came on Saturday morning as officers arrested Siriphop Jaitrong, 35, as he was picking up 5.4 kilograms of kratom leaves from the Pa Khlok Post Office.

Thalang District Chief Veera Kerdsirimongkol, who had originally drawn national attention to the issue, led the raid at the post office.

Mr Siriphop was under police observation as a suspected drug dealer when police were able to confirm that he was receiving drugs through the mail, confirmed Mr Veera.

“Mr Siriphop confessed that the boxes he had picked were full of kratom leaves and that they belonged to him,” Mr Veera said. “After searching his home, we found that he was also illegally in possession of a gun and five rounds of ammunition.”

In early July, it was discovered that a huge amount of drugs, including more than five kilograms of marijuana and 100g of ya ice (crystal methamphetamine) were being sent by post to Thalang (story here).

To combat the ‘Post Office Drug Service’ Mr Veera had suggested that new security measures be taken and new regulations be put in place.

“Post offices should have scanning machines, as well as a drug dog to help put an end to this,” Mr Veera said last month.

Mr Veera also pointed out that there are a number of private postal companies whose services could also be abused.

In response, the Narcotics Control Board (NCB) sent letters to all government and non-government postal delivery providers in Thailand asking them to review their policies to help prevent drugs from being shipped throughout the country.

The issues of kratom, native to Southeast Asia, now being imported into Thailand following many of the trees in the country having been cut down, is increasing as the entire youth culture around the traditional drug continues to boom (story here).

Gunman shoots one at crowded Chinese ceremony in Phuket