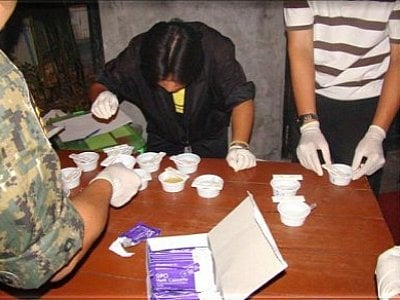 PHUKET: A Public Health Ministry center in Phuket is now conducting drug tests on urine and blood samples provided by police in a move that is expected to boost the number of drug convictions in Phuket.

The tests will be conducted at the Regional Medical Sciences Center in Phuket, just north of the Heroines’ Monument on Thepkrasattri Road in Thalang.

Kamon Foihirun, the center’s director, explained to the Phuket Gazette that police in Phuket previously had to send urine and blood samples to centers in Surat Thani or Trang.

The delay in sending samples outside the province often meant the samples were too old by the time they were tested for verification, and the results did not match those of the original test, according to Phuket’s Deputy Police Commander Komol Wattarakorn.

In the run-up to the launch of the service, Col Kamon last week staged a seminar to educate 60 Phuket officials involved in obtaining narcotics tests so they would understand what the entire process involves.

“We should have test results ready within three days, but completing the appropriate paperwork will require five to seven days to complete the process,” he said.

Five officers from the center, two laboratory technicians and three staffers, were trained at the Regional Medical Sciences Center in Chonburi.

The Phuket center can now test for all five classes of narcotics that are illegal in Thailand, including, specifically, ya bah (methamphetamine) and ya ice (crystal methamphetamine), he added.

“Both of these drugs are rapidly spreading throughout in Phuket,” the police officer said.

By next year officers at the center will be able to conduct more extensive tests to determine the presence of drugs at crime scenes and on items seized as evidence, he added.

He invited any person or organization to use the service.

“Any government offices, private companies – including hotels participating in the ‘White Hotel project’ – or schools can send us samples to be tested for drugs

“Tests for ya bah cost 250 baht, while tests for marijuana or ecstacy require special methods and cost 1,000 baht each,” Col Kamon said.

MET: Phuket haze ‘not a load of hot air’