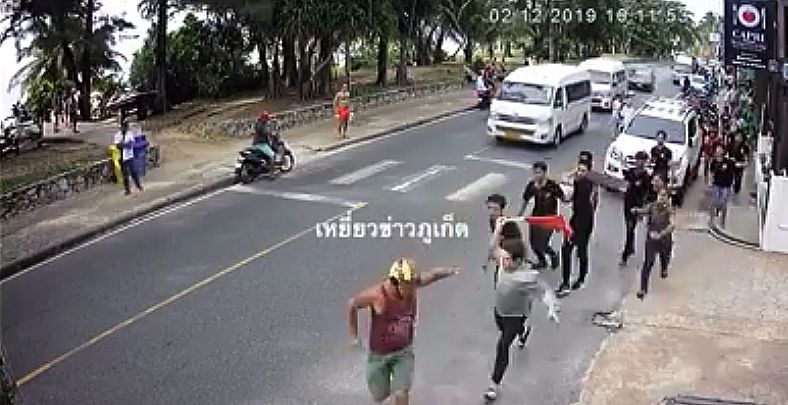 A post on the Facebook page ‘Newshawk Phuket’ has a 30 second video captioned ‘in Karon, what happened?This happened on December 2 at 4PM, on the road, in front of Karon Beach, Phuket’.

The video shows a group of people running after a western man and attacking him.

Today , Karon Police Superintendent, Pol Col Prawit Suthiruang-Arun, told media that he has ordered Karon police to investigate the incident as depicted in the video.

Karon police received a report about a physical assault in front of a seafood restaurant located on the beachfront of Karon. At the scene, police found an American man, 44 year old ‘Conelly’, and three restaurant staff including 27 year old Teeraporn Thitayaporn, 20 year old Aomin Wen from Myanmar and 21 year old Nadee from Myanmar.

After speaking to the people involved, and witnesses, police found that there was a ‘misunderstanding’ when Connelly was having a conversation with the staff about food, which resulted in the fight as seen in the video.

Police allowed the two sides to talk so police could get a better understanding about what happened. The two sides confessed to the police that they both attacked each other. However, they only suffered minor injuries.

The staff, as well as the American man, were fined 500 baht each by the Karon police. The matter was settled by the local police without any arrests.

Later, all the ‘players’ told media they had no intention to file criminal or civil charges.