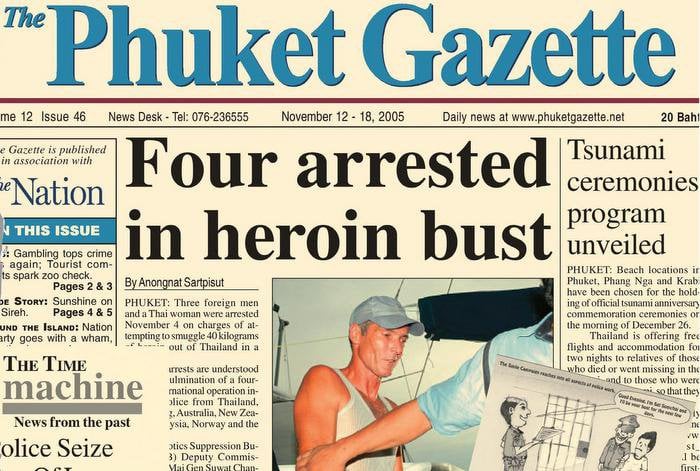 PHUKET: Headlines about methamphetamine, kratom, marijuana and even a little cocaine find their way into the Phuket Gazette fairly regularly. But, heroin… that’s a beast that rarely surfaces on this paradise island.

There was of course 22-year-old John Cawley, who was busted for running ‘birdie powder’ from Phuket to Koh Samui in 2013, but smack in general is either very well protected, or not a substance of choice in Phuket (story here). Nonetheless, the white dragon splashed out across page one of the Gazette a decade ago as three foreigners and one Thai were charged for attempting to smuggle 40 kilograms of heroin out of Thailand on a yacht. A plan not all too dissimilar to a scheme that entangled a former
Phuket resident in an international plot to move enormous stockpiles of North Korean methamphetamine (apparently the best of the best in terms of quality) through Thailand and into the United States. Now that was a Tom Clancy plot line if Phuket ever saw one (story here).

In both cases, well-planned international government operations took the alleged drug smugglers down before the sumptuous amounts of drugs flooded the streets of either Australia (in the case of the heroin) or New York City (in the case of the North Korean meth).

Phuket without a doubt has real drawl for international criminals looking to go ostrich and keep their heads low for a while. Just last week, Interpol was ahead of the clairvoyant curve and pushed police to scoop up a Russian national wanted in his role in a 62-million-baht parapsychological and extrasensory perception (ESP) services fraud case (story here).

The November 12 -18, 2005 issue of the Gazette wasn’t all about international drug smuggling though. In fact, on the side of page one, the newspaper announced the details of the 1-year anniversary of the tsunami.

In extraordinarily compassionate move, that borders in being heroic, Thailand offered relatives of those who went missing or died, as well as those who were injured in the disaster, free flights and accommodation for two nights to those wishing to attend the ceremonies at beach locations in Phuket, Phang Nga and Krabi.

Also catching headlines ten years ago was the Phuket Zoo, which the Phuket’s dolphinarium has recently nuzzled up against in Chalong. A number of tourist complaints about the conditions of the zoo prompted Phuket Governor Udomsak Uswarangkura to lead an investigation into the possible maltreatment of the animals and water quality. A decade later, Gazette columnist Patrick Campbell happily discovered real improvements at the facility (story here and here). However, a larger moral battle is now being fought over the dolphinarium with people taking sides on the idea of captive sentient animals in general.

One such animal that doesn’t seem to be weighing into the debate are soi dogs, whether or not they can be considered domesticated is really up for debate. Nonetheless, November 2005 was a big moment for soi dogs on Phuket, as the government officially gave the Soi Dog Foundation ‘foundation status’, allowing those local canine heroes involved to return to their good work from which we continue to benefit, ten years later.