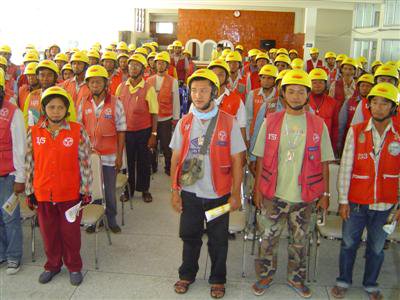 The color yellow symbolizes devotion to the king and are part of a campaign to discourage vote buying in the upcoming government elections on December 23.

The helmets were donated by Ruam Pong Motor Co Ltd. and are adorned with a sticker that reads “Do good for our nation’s father – do not sell your votes”.

Preecha Suekeaw, vice president of the Motorcycle-Taxi Riders’ Association, said, “We will help with this campaign by wearing our helmets to show that we support honesty and are against vote buying.”