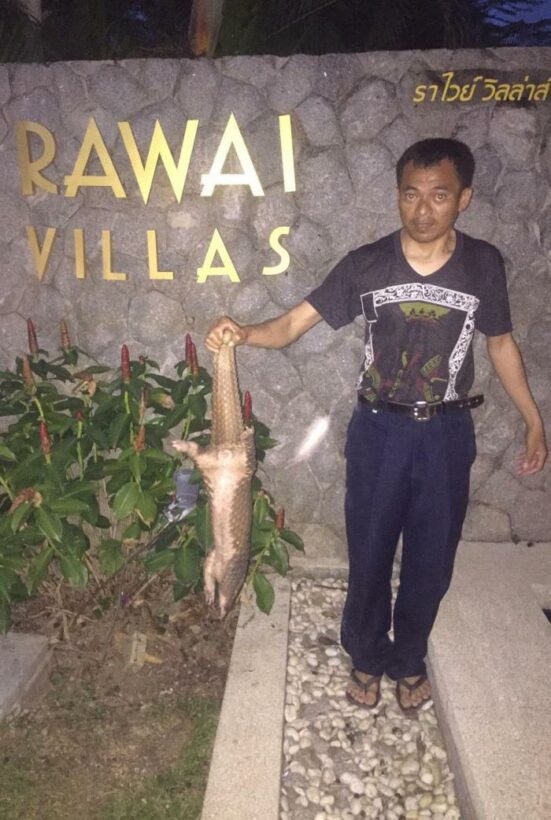 PHUKET: A night guard working in Rawai discovered a rare and endangered mammal early yesterday morning, and quickly sprang into action to protect the creature from harm.

Guard Sanya Ritto noticed a creature in the undergrowth during one of his security rounds at the Rawai Villas development. Recognizing it as a Sunda pangolin, he approached it. However, following its natural instincts against predators, the pangolin wrapped itself into a tight ball.

Mr Sanya grabbed it by its tail and delivered it to the estate, informing the estate manager, Sorapan Ruffier, of his discovery.

Working quickly to make the creature as comfortable as possible, another guard, named Rungroj Jaengmeg, built a temporary enclosure for it and dug up ant hills to feed it.

“Such was his concern for the animal’s well-being that he didn’t realize he was being bitten all over his arms at the time,” Rawai Villas estate developer Bob Windsor told the Phuket Gazette.

“I’ve named him Houdini, after he amazed us by using his strong claws and tail to escape from a dog cage built to contain a 16kg animal.”

Mr Windsor and his team at the estate contacted the head of the wildlife department to seek assistance in finding a suitable area for it to be relocated. They were introduced to the Ton Sai Waterfall nature reserve, where the creature has now been housed.

“We are all very proud and appreciative of our group of guards and their efforts to save and protect this beautiful creature. We hope it will live safely for many years and find a partner to expand its very endangered species, so future generations will be able to enjoy the natural wonders of our world,” said Mr Windsor.

Pangolins are currently among the most heavily poached and exploited animals, hunted for their skin, scales, and meat, which are used in manufacture of clothing and traditional medicine. Unlike other mammals, they don’t have hair on their body, but instead have scales made of keratin.

There are eight species in total; four in Africa and four in Asia.

Despite enjoying protected status globally, illegal international trade, largely driven by Chinese and Vietnamese buyers, has led to rapidly decreasing population numbers, making it a ‘critically endangered’ species, according to the ‘International Union for Conservation of Nature’.

The International Union for Conservation of Nature Species Survival Commission (IUCN-SSC) Pangolin Specialist Group estimates that more than a million pangolins have been snatched from the wild in the past decade.