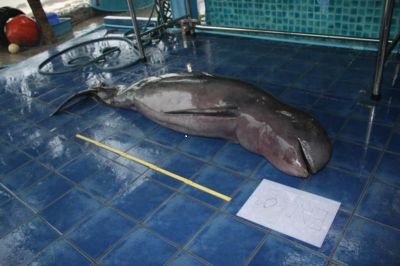 PHUKET: Trawling by fishermen in the seas off Phuket and other parts of Thailand has led, it is charged, to the deaths of around 20 dolphins since the beginning of this year.

Two more turned up dead last week in Satun province, on the southern border with Malaysia, and one was found on Saturday, badly injured in the surf off Nai Thon beach on Phuket’s northwest coast.

Phuket Marine Biological Center (PMBC) researcher Phaothep Cherdsukjai told the Gazette that two dolphins have been found dead on Koh Sarai, an island in Satun province about 20 kilometers off the southern coast.

According to Mr Phaothep, the cetacean’s age was estimated to be not more than one year old because the teeth were not yet grown.

Examination showed wounds around the snout-end, which were probably consonant with those produced by a trawl. Caught in the trawl and unable to come up for air, she evidently drowned.

Examination suggested that the animal, a close relative of the orca, may have succumbed to a lung infection rather than to fishermen. Her age was put at about one year; weight 65 kilograms, length 171 centimeters.

“Most dolphins discovered dead or wounded,” said Phaothep, “are victims of fishing trawlers.” He said his institute is trying to solve the problem “through education.”

“Fishermen are taught that when dolphins are caught in their nets they must let them go immediately before they drown or are wounded.”

Such wounds often become infected and lead to the creatures’ demise.

The researcher explained that dolphins are more sensitive than people generally realize. “Sometimes, when caught in the trawls, dolphins die right away – merely of shock,” he said.

As proof, perhaps, that the PMBC’s campaign to educate people about dolphins is taking hold, on Saturday it was reported that authorities at Sirinat National Park on Phuket’s northwest coast called in help from the institute’s Rare Marine Animals unit when a fully grown female was found by villagers at Nai Thon beach.

The 2.5-meter-long bottle-nosed dolphin had washed up on the sand – still alive.

Villagers put the limp creature in water “to keep her from over-heating” and notified authorities.

Unfortunately she died before help could arrive. PMBC staff noted that the dolphin had suffered numerous abrasions “probably from tumbling in the surf and on the rocks” and estimated her age at about 15 years.

The report said that the animal was probably ill before growing too weak to remain at sea, perhaps from disease communicated by another dolphin.

A Life Remembered”¦ A tribute to Keith Floyd