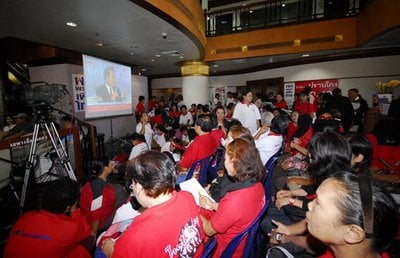 PHUKET: The court on Friday found Mr Thaksin guilty of abuse of power, ordering the seizure of 46 billion baht of the fugitive former prime minister’s 76 billion baht in frozen assets.

There were 523 respondents to the poll, which asked readers what they thought the Supreme Court’s ruling would be, and what effect it would have on Phuket tourism.

In the end, more than two-thirds (69.2%) of respondents thought the court would order the seizing of most of the money, though they were split on its consequences for Phuket.

Almost half (46.1%) were correct on the court ruling, and thought its impact on Phuket tourism would be insignificant.

So far this scenario has been borne out, with no reports of disturbances in Phuket or the rest of the country.

Nearly one-quarter (23.1%) were also correct in predicting most of the assets would be seized, but thought there would be a significant impact on Phuket tourism.

Mr Thaksin’s claims that he has not received justice and that he will ‘continue to seek it’ confirm it that may well be too early to pronounce the tourism industry out of the woods yet.

Around one-fifth of readers (19.7%) thought the court would seize less than half to none of the assets, and there would be no significant impact on the tourism industry.

Finally, 11.1% of voters thought the court would seize less than half to none of the assets but that this would cause a significant impact on tourism here.

Phuket Gazette Readers’ Poll: Do you drink and drive?

MOTORBIKES: Let’s get honest with tourists