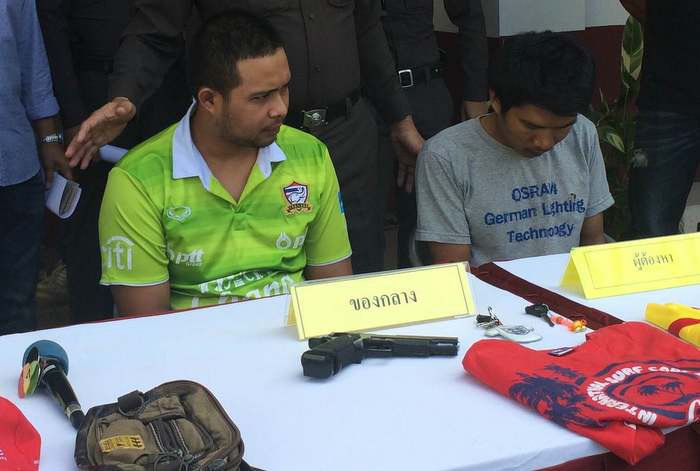 PHUKET: A pair of pharmacy stick up artists were cuffed after a six-day spree in Phuket.

Hadsadin Art-aonsri, 26, and Jetsada Petkaeo, 24, were arrested by police after attempting to rob one pharmacy once and successfully robbing another twice.

The pair were nabbed after robbing JK Health Care for the second time, this time at about 4:30am.

“We actually recognized the pair caught on CCTV from another robbery case we were working on. We were already in the process of securing an arrest warrant to pick them up at a rental house,” said Lt Col Sutthichai Tianpho of the Patong Police.

Both men confessed to robbing JK Health Care by threatening a staffer, Sangdao Phu-sang-kham, with a plastic handgun this morning. They made off with 12,220 baht.

The pair also confessed to having robbed JK Health Care of about 6,000 baht on January 21, as well as attempting to rob Bangla Pharmacy yesterday afternoon.

Mr Hadsadin and Mr Jetsada failed to make off with any cash from Bangla Pharmacy after a staffer began fighting back and calling for help, explained Col Sutthichai.

“We believed that the robberies were connected by Samuejai Nakara, who used to work for both pharmacies before being fired because she was stealing money,” Col Sutthichai said. “After questioning the men, we found out that Ms Samuejai is Mr Jetsada’s girlfriend.”

Both men have been charged for the robberies and for carrying a fake gun in public. Police are also looking to bring Ms Samuejai in for questioning.