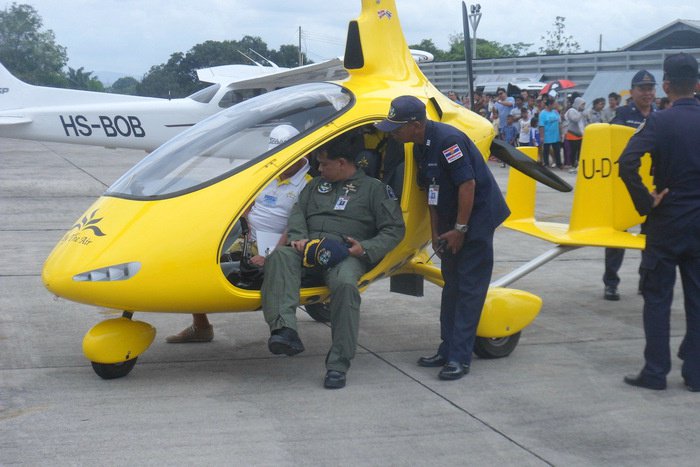 PHUKET: There has been a great deal of activity at Phuket Airpark in Pa Khlok recently, as ever more private aircraft arrive there, adding to the small but impressively diverse and growing fleet of fixed-wing aircraft, gyrocopters, paramotors and ultralights.

Pat James, who heads the Phuket Aviation Club (PAC) based at the airfield, said his growing association is seeking new members who have a “passion for aviation”, which is the PAC slogan.

“It’s a truly worthwhile club for anyone with the slightest interest in any type of aviation,” he says. “It is really spreading passion for aviation in Thailand,” says Pat, a former US military combat helicopter pilot during the Vietnam War.

The PAC has joined forces with the Siam Aviation Association (SAA), a long-established aviation club in Thailand led by president Pol Col Amrung Chitpakdee and its secretary Peter Thomson, he adds.

“Together, SAA and PAC are committed to promoting general aviation in the region. Working together, PAC and the SAA each bring special talents and much-needed support to both current and future pilots. We provide everything from simple question-and-answer sessions for those hungry for information, as well as social events, fly-ins, regulatory support, newsletters and websites,” Pat explains.

“SAA has organized flights both inside Thailand and internationally. The term ‘general aviation’, or GA, includes everything from paramotors and ultralights to light, single and twin-engine aircraft. These allow aviation enthusiasts to enjoy everything from local area flights to longer cross-country hops. These are just an engine start-away for our members.”

“General aviation communities around the world provide enhancements to their surrounding local communities. General aviation – in many ways similar to the yachting industry – is growing in leaps and bounds. New aircraft are arriving in Thailand at the highest rate ever, with new designs and less complexity.”

PAC offers lifetime membership for a 25,000-baht fee that allows full membership privileges and voting rights, plus Department of Civil Aviation (DCA) support for aviation requirements of up to 50,000 baht.

There is also a 1,500-baht annual administration fee. Annual membership at 7,500 baht per year can be upgraded to lifetime membership on the member’s fifth year of membership, or if the member

owns a share in an aircraft at the Phuket Airpark, or is already in good standing with the DCA and Phuket Airpark regarding safety issues.

“The information made available to current members free of charge can save not only time and hassle, but also money. PAC staff deal with the DCA and the Ministry of Transport every week on a wide range of issues. Aviation laws, regulations and policies change without notice in Thailand. By being informed early, many negative issues can be avoided,” says Pat.

There is also a section covering the DCA and business side of aircraft flying and ownership in the region. Other sections explore such important issues as proper aircraft maintenance and new products.

The newest arrival is the Airpark’s third AutoGyro Cavalon, named “Angry Bird” by its proud owner Arnaud Verstraete. The long-time Belgian Phuket resident is getting the paperwork done so he can take the tiny aircraft aloft.

The pair, who have acquired the exclusive rights to sell AutoGyros in Thailand, finished their training under Captain Pat, who then cut off the back of their shirts as part of a ritual that started out in the US, intended as a symbolic show of confidence by their instructor in students’ abilities aloft.

During Children’s Day on January 10, the commander of the Royal Thai Air Force Wing 56 in Haad Yai requested the PAC to support their efforts in bringing a much-needed holiday to local residents from throughout Songkhla.

A small group of aircraft owners quickly agreed at short notice to fly south, where they offer both visual and flight displays to complement the impressive efforts of Wing 56, which operates out of its large airbase next to Haad Yai International Airport.

The successful event exceeded anyone’s expectations. Estimated crowds of more than 30,000 excited parents and children took part, arriving in groups from sunrise to sunset. Air shows and non-stop demonstrations were provided by the many different elements of Wing 56.