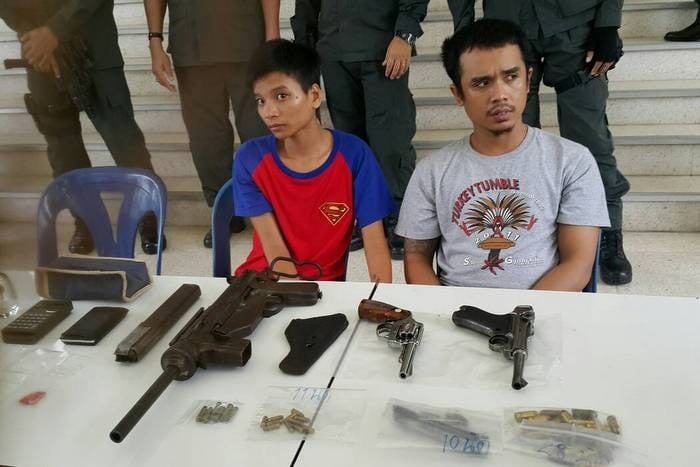 PHUKET: Police have cracked open a drug and weapons network after arresting two methamphetamine dealers in possession of a weapon of war and other guns in Phuket on Monday.

Thammanoon Kaewsirnuon, 31, and Khlongsiri Rorngsakul, 24, were caught at their rental house in Thalang on Monday, after police were tipped off by a man named by officers only as ‘Pop’, who was arrested on June 17 for drug possession.

“Mr Pop was buying drugs from Mr Thammanoon and Ms Khlongsiri, and told us about their involvement in the network,” said Phuket Provincial Police Commander Patchara Boonyasit.

“We then located their homes, monitored their activities and collected evidence. We were able to move in and make an arrest on Monday.”

“The two suspects told police that the drugs and weapons belong to Somsak Pankhao, the alleged head of their network,” said Maj Gen Patchara.

Police have now launched a manhunt for Mr Somsak.

“This is a big case. The government has ordered all provincial police to keep an eye out for these types of criminals,” Gen Patchara said. “We have ordered all police stations in Phuket to pay attention to this issue and continue to work hard to keep Phuket residents safe.”