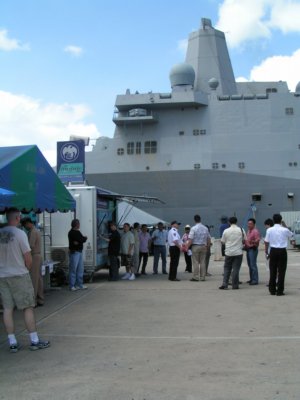 PHUKET: The unprecedented arrival in Phuket of five US Navy ships at the same time has given a boost to the island’s tourism industry and local economy, with about 5,700 US sailors and marines enjoying R&R on Phuket over the next few days.

Benefiting greatly from the steady stream of crew members venturing onto Phuket island are numerous taxi and mini-van operators waiting dockside to take visitors to entertainment areas such as Patong. According to one of the crew members who spoke with the Gazette, taxi drivers are charging an extortionate 2,000 baht per trip – about 1,400 baht more than the price local expats would consider a reasonable fare.

Food and souvenir vendors near the dock at the deep sea port are also charging high prices for their wares. Small bottles of water that usually sell for about ten baht each in convenience stores are sold on the dockside for 20 baht each.

USS New Orleans Commander Scott Davies said it was the ship’s first visit to Phuket. Mr Davies explained that the USS New Orleans has expanded medical capabilities and larger flight decks specifically designed for humanitarian missions, and that the ship’s crew are well versed in such scenarios from practice drills in the US.

When asked why Phuket was chosen as a port of call for all five ships, Mr Davies explained that Phuket was the destination of choice among crew members due to the island’s diverse options in entertainment. That sentiment was confirmed by other crew members who said that they always receive a warm welcome from the locals in Phuket.