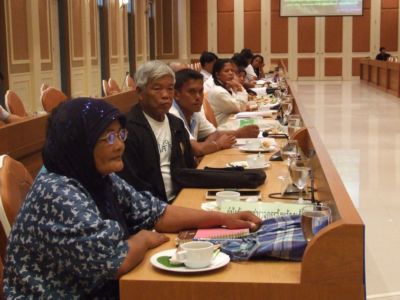 RAWAI, PHUKET: Many Moken sea gypsies living in a village close to Rawai Beach are still heavily in debt to violent loan sharks, despite the actions of a community organization which paid off more than half a million baht’s worth of their debts earlier this month.

Now, the villagers have agreed to strict new rules aimed at helping them pay off the debt.

“The villagers have had to agree to stop gambling and drinking and to keep their village clean,” Preeda Kongman, a community organizer, told the Gazette.

Cutting out gambling and drinking would make it easier for them to save money, while keeping the village clean would keep them healthy enough to work off their debts, she explained.

Although the ‘Poor’s Right to Develop Phuket Network’ (PRDPN) paid off debts worth more than half a million baht for 162 of the village’s residents, debts of more than two million baht – backed up by threats of beatings and electrocution – still hang over many of the villagers.

“154 sea gypsies still have a total of more than two million baht’s worth of debt at very high interest rates because they can’t borrow money through official channels,” Ms Preeda said.

“But during the monsoon season they need the money to survive,” she added.

Ms Preeda said a saving scheme had been set up in which villagers were asked to pay in five baht every day.

In addition to the money still owed to loan sharks, the villagers will have to pay back the half a million baht paid by the PRDPN, though at the significantly more manageable interest rate of six percent per year.

A meeting at Phuket Provincial Hall presided over by Vice Minister to the Prime Minister’s Office Nipon Boonyapataro and attended by Phuket Governor Wichai Phraisa-ngop, last week aimed to hammer out a solution to the problems of the villagers, which are not confined to debt.

Gov Wichai reiterated a promise to work with landowners to improve the water and electricity supply to the village – a pledge he made back in April following a protest outside Provincial Hall.

“The land the village is built on belongs to four private landowners who won’t allow electricity cables to be set up in the area,” Gov Wichai said.

“A process of verifying the title deeds is underway, but it’s going to take a long time, so we’ve asked the landowners to sell the land to Rawai Municipality at a cheap price.”