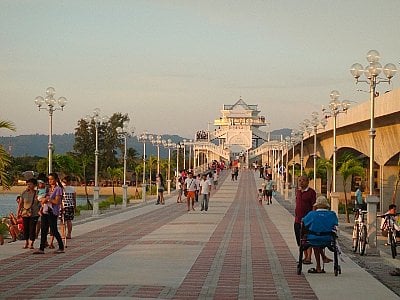 PHUKET: The popularity of the new-look Sarasin Bridge as a tourist attraction is forcing local authorities to address the growing number of mobile vendors who have set up operations at both ends of the span, in Phuket and Phang Nga.

Officials are also planning to replace light bulbs at the site damaged by the recent storms.

Conversion of the bridge into a pedestrian promenade has attracted a great many visitors and is a popular attraction for motorists traveling both on and off the island, Phuket Provincial Highways Office chief Arun Sanae told the Phuket Gazette.

The renovations were completed in August and the span was opened to pedestrians later that month.

“Any place where there are lots of tourists in Thailand, vendors are sure to follow. In the case of the Sarasin Bridge, as many as 50 mobile vending operations have been set up already, some on the Phuket side and others on the Phang Nga side at Tha Thanoon.

Mr Aroon said he would ask the relevant tambon administration organizations (OrBorTor) to organize the vendors.

“We will allow them to continue selling food, drinks and other products, but we need to organize proper places and facilities for them so that the beautiful scenery remains beautiful,” said Director Aroon.

Another visual distraction were the number of defunct lighting fixtures along the walkway, he said.

“During my latest inspection I found several that were missing or broken. I have already ordered the construction company [Italian-Thai Development Plc] who built the bridge to check it and take care of the problem,” he said.

In a somewhat ironic note, the overnight success of the Sarasin Bridge promenade instantly eclipsed that of the 46-million-baht Phuket Gateway, located a few kilometers to the south along route 402.

Intended to serve as the iconic first stop on the island, the Welcome Gate has been largely ignored since it opened in 2007.