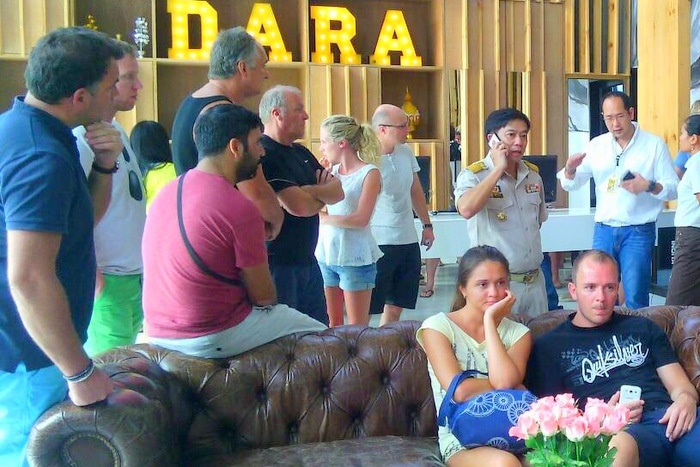 PHUKET: About 100 of the 400-odd tourists stranded in Phuket are about to fly out today, after sandstorms and poor visibility in the United Arab Emirates forced Eithad Airways to cancel its flights to Abu Dhabi on Saturday.

The airline transferred the affected passengers by shuttle bus to the Dara Hotel, the Chino Hotel and the Millennium Resort, while alternative flights were organized.

“We are working with the airline and communicating with the passengers,” said Santi Pawai, director of the Ministry of Tourism and Sports Phuket office.

“The airline said that they will take responsibility for accommodation and food, and that they will try to get the passengers to Abu Dhabi as soon as they can, even if they have to fly with other airlines.

Some of the stranded passengers at the Dara Hotel expressed their frustration to the Phuket Gazette.

“We don’t know how long it’s going to take for the airline to get us back home,” said Roderick Robinson, 50, from the United Kingdom.

“Staff from the airline came to see us twice, but didn’t give us any information about when we will leave,” said another passenger, who declined to be named.

“We understand that there can be problems caused by natural events, but aren’t we supposed to get information from the airline? When will we go home?”

Mr Santi called for calm and patience among the passengers.

“For now, all we can do is wait for the airline to confirm alternative travel arrangements,” he said.

Staff at the Etihad Airways office at Phuket International Airport confirmed that the flights EY0430 and EY0430 were cancelled on Saturday, but declined to comment further.