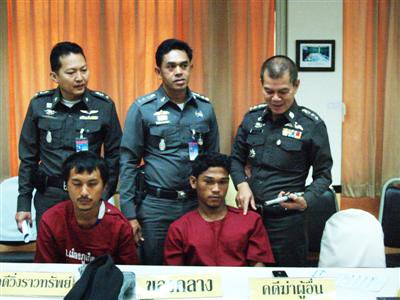 PHUKET CITY: The suspected killer of a ladyboy found dead in Wichit on Saturday morning was caught early Wednesday morning at a short-time hotel near Saphan Hin.

Mr Phichai was initially arrested by Phuket City Police crime suppression officers for the illegal possession of a firearm.

Subsequent investigation linked the gun to the the shooting murder of 35-year-old ladyboy Wanchai Tongwijit on Saturday.

Wanchai was found dead with a single bullet wound to the temple in the doorway of a shack in Wichit .

A key lead in the investigation came from staff at Ruampon Mobile, a cell phone shop on Phatthana Thong Thin Road in Wichit.

Workers there identified Mr Phichai as the man who had brought in the deceased’s mobile phone for repairs.

Mr Wanchai had a habit of seeking sexual favors from young men, according to the press release.

On the day of the murder Mr Wanchai asked Mr Phichai for sexual services, police said.

But rather than satisfy his client’s desires, Mr Phichai used the opportunity to rob Mr Wanchai of his possessions and shoot him though the skull with a .38 caliber pistol, police allege.