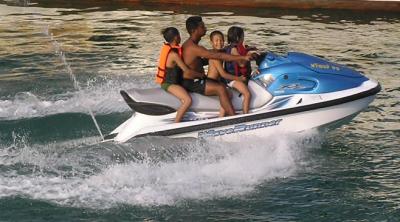 PHUKET: Phuket Governor Udomsak Usawarangkura yesterday reaffirmed his stand on ridding the island of jet-skis by March 1, 2011, and said that any person who rents out a jet-ski after that time will be prosecuted. Speaking at a press conference at Phuket Provincial Hall yesterday, Gov Udomsak said that under the plan, all existing jet-ski registrations will expire within seven years and no new ones will be issued. “If [anyone] doesn’t believe it and continues to rent out jet-skis [after March 1, 2011] they will see. If there is a fatality, they will be held accountable and prosecuted,” said the 59-year-old Governor, who will retire from the civil service next year. “There are 219 of jet-skis registered in Phuket, but these will be phased out over seven years. Their owners will need to find new occupations. There are many jobs available for them in Phuket’s tourism industry, so there is no reason for them to rely solely on jet-ski rental,” he said. The plan to establish Phuket as a “jet-ski-free” province followed the deaths of two European tourists late last year, one of them a 13-year-old boy. Kritpetch Chaichuay, head of the Phuket Marine Office, told the Gazette that jet-skis operators are now restricted to five beaches: Patong, Kamala, Kata, Karon and Bang Tao. He added that the coastline along Patong Bay has been divided into five zones according to activity: 1. swimming pens with beach access channels for water craft; 2. water sports; 3. pick-up/drop-off points seagoing tourists; 4. small vessel anchorage; 5. large vessel anchorage. The zones will be strictly enforced during the November-April high season, he said. Other beaches will maintain the current system whereby jet-skis will continue to enjoy the run of the entire beach, apart from where pens have been designated for swimming. K. Kritpetch added that many jet-ski operators remain unaware of the long-term damage to the country’s reputation their industry has caused. “Marine Police and Royal Thai police officers, together with district officials, are working together to inform members of Phuket Jet-ski Club of the regulations. We are warning them that any violators will be arrested,” he said.