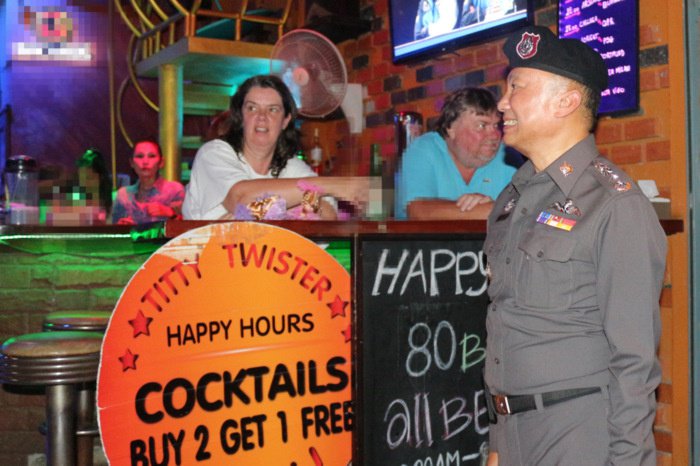 PHUKET: The Phuket Provincial Health Office (PPHO) has confirmed that it will not take action against restaurant and bar owners for showing images promoting alcohol – unless a specific complaint is made against the venue.

The news follows a report of a restaurant owner in Bangkok being sentenced to pay 460,000 baht for breaking the Alcohol Control Act of 2014.

The venue operator was found guilty of showing pictures of beer bottles and glasses with beer and liquor brands for 220 days, from July 30 to March 6 (story here).

“By law, there must be no photos of alcoholic drinks on any menus,” confirmed Dr Prapa Nakara, director of the PPHO Non-communicable Diseases division, who directly heads the enforcement of alcohol-related regulations on the island.

“Drink names and prices are allowed, but no pictures or promotions that encourage people to drink.”

However, the PPHO will not fire straight into legal action against Phuket venues that break the alcohol promotion laws on their own premises, Dr Prapa confirmed.

“If we receive a complaint of a venue breaching the Alcohol Act, we will send staff to investigate,” she said.

“But then, we will see what action should be taken against the offense. If it is not serious, we will advise the venue owner to rectify the problem. Only if they fail to do so will we call the police in to press charges.”

Dr Prapa stressed that ignorance of the law was no defence against legal action (story here).

However, she also assured that the PPHO had no intention of launching any crackdown on the matter.

“We will not be picking on vendors in Phuket, as long as their actions do not obviously encourage people to drink alcohol in public. We will take each instance case by case,” she said.

PPHO Chief Dr Kajohnsak Kaewjarus explained that the stance to not crack down on alcohol promotion within venues was in line with provincial policy to support tourism.

“We will not crack down on photos of drinks on menus. Phuket is a tourist destination. We do not want to be that strict on alcohol, otherwise it will affect our tourism industry,” he told the Phuket Gazette.

“The law is the law, but we will apply the law in line with provincial policy. The PPHO works together with the Governor’s Office and local police. We are not the sole authority for enforcing alcohol laws on the island.

“However, if anyone reports any venue breaking alcohol laws, we will have no choice but to investigate.”

Dr Kajohnsak noted that complaints could be filed by calling the PPHO at 076-211330 during government office hours.

“People can also call us for advice on whether or not they are breaking the law,” he said.

All the laws regulating the promotion and sale of alcohol are posted in Thai on the official website for the Office of the Alcohol Control Committee (click here).

Please note that none of the links to the laws on the English version of the website work.

For the benefit of Gazette readers, below are links to unofficial English translations of three of the main pieces of legislation:

2. Ministerial Regulation On Criteria and Conditions for Displaying the Symbol for Advertising or Public Relations of Alcoholic Beverage BE 2553 (click here).