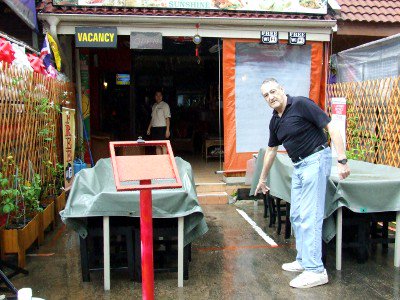 PHUKET: Business owners in the chaotic street of “Soi Centara“, formerly known for years as “Soi Islandia Resort“, in Phuket’s tourist-popular Karon Beach area, have won a reprieve from having structures on their street demolished.

Adam Simone, owner of Bershat Guesthouse and a resident in the area for more than 12 years, told the Phuket Gazette, “Two days ago we received a call from a company called JK Co Ltd saying that if we didn’t clear our belongings from the street they would bulldoze it all down on Saturday morning [today].

“Everyone will lose a lot of money if they proceed. For me, I will lose a sala [pavilion] that cost 150,000 baht to build. It’s been there for about one and a half years and I have never received a complaint about it.

“Everyone else in the street is in the same situation. Now we’ve had one guy come and tell our Thai staff to remove it or they’ll destroy it,” he said.

“There have been no negotiations and no deadline has been given to give us a chance to remove our things so they’re not destroyed. Given the chance, I would pay rent to keep it there,” he added.

However, Joy Orevich, owner of the Aussie Joy Tour & Guest House, who lives in a small alley that joins the two parts of Soi Centara, told the Gazette, “I agree with JK Co in clearing the street. Cars cannot get through because there are so many obstructions.

“Many times I have had to yell at staff at the restaurants to move their tables and chairs just so I can get to my house,” she said.

“Now imagine if something bad happened and an ambulance had to get in there. Clearing the street would make it much safer for everyone,” she added.

A representative of JK Co Ltd told the Gazette late yesterday afternoon that that was exactly the reason the company would like to clear the street.

However, she also confirmed that the last-minute reaction to the move to clear the street has won the shop owners a temporary reprieve.

“We will send a letter to the shop owners, probably on Monday, but we will not be clearing any structures from the street tomorrow,” she said.

Mr Simone said that Chalong Police had been notified of the situation and that he was told police would act as “mediators” in talks between shop owners and JK Co Ltd on Monday.

Police mediation is a highly controversial yet widespread practice in Thailand, in which a local police department, acting ostensibly from neutrality, attempts to broker a settlement between disputing parties.

With police corruption an ongoing threat in some jurisdictions of the country, the neutrality of mediation is often challenged, some pundits referring to it as a “business opportunity”.

Police confirm handover of 95 Rohingya near Phuket to Thai Army