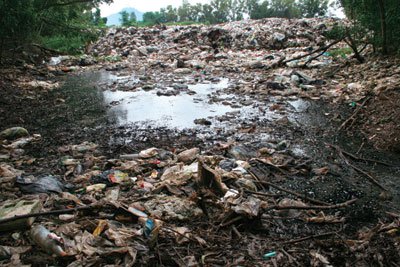 PHUKET CITY: The launch of a plastic bag charging scheme which aims to reduce the amount of garbage generated on Phuket has been postponed for more than two months.

The scheme will see major retailers such as Central, Big C, Tesco-Lotus, Makro, Supercheap and Jungceylon charge shoppers one baht for a plastic bag with a five-liter capacity or less and two baht for larger bags.

Mr Jirasuk was speaking following a meeting to discuss the scheme at Provincial Hall yesterday.

“Vice Gov Teerayut commented that to launch the project on December 5 wouldn’t leave enough time to promote the scheme to the island’s residents,” Mr Jirasuk said. “We agreed to postpone until February 14 to give us more time.”

Mr Jirasuk said one idea agreed upon was to record Phuket Governor Wichai Phraisa-ngop speaking in support of the scheme. The recording would be played on radio stations and on the shop floors of participating retailers.

Local organizations have also been asked to supply cloth bags to substitute for those made of plastic, he said.

Mr Jirasak said Phuket Energy Office welcomes any comments regarding the project and invites anyone with suggestions to call the office on 076-210178-9.

Nick Anthony described government support at both local and national level as excellent.

Central Festival Phuket will host a public awareness campaign next Monday morning with 40 retailers setting up displays to promote the campaign and bring everybody on board, he said.

Central has also agreed to donate all proceeds from the sale of plastic bags to charity, he said.

Mr Anthony said he hopes that the successful launch will be the first step in a source reduction strategy that will eventually see retailers mutually agree to cut down or even eliminate the distribution of advertising circulars that are also a large component of the waste stream.

He is also working with environmental activist and sea kayak tourism pioneer John Gray to extend the plastic bag strategy to cover Phang Nga Bay as soon as possible.

Asked if major convenience store chains like 7-Eleven were signed up for the initiative, he said the management of CP Group which operates the chain on a franchise basis were seriously considering the proposal.

7-Eleven stores in China and other countries have already started to charge for plastic bags, he said.

Mr Anthony said he hopes support among retailers at all levels will be so thorough that those failing to take part will be boycotted by shoppers.

The delay in the launch is to allow stores time to prepare alternatives to plastic and educate the public, he said.

Mr Anthony said that one of the keys to success would be getting support from local administrative bodies in ensuring that all retailers in their jurisdiction, including small ‘mom-and-pop’ shops, are aware of the campaign and actually take part in it.