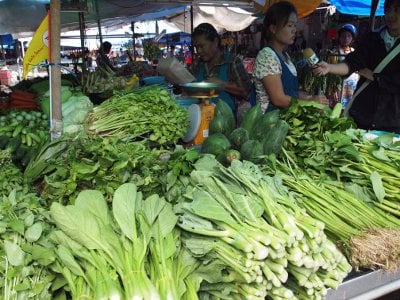 PHUKET: Local residents worried about overpriced onions and pricey pineapples during the Phuket Vegetarian Festival fear not: recent flooding in central and north Thailand will only have a slight effect on produce prices, at least according to officials.

The Phuket Provincial Internal Trade Office (PITO) has announced that the flooding crisis in the northern and central parts of Thailand would not have a major impact on vegetable and fruit prices during the annual festival, which starts on September 27 and runs through October 5 this year.

Despite this assurance, many vendors at a fresh market have told the Gazette they plan to increase produce prices by 5 baht to 10 baht per kilo, saying demand always drives prices up during the festival.

“I sent my team out to survey fruit and vegetable prices at fresh markets in Phuket. We have found out that the price of Chinese kale, morning glory, and Chinese cabbage have thus far only increased about two or three per cent,” said Miss Supatcha Boonpalit, acting director of the Phuket PITO.

Phuket buyers mostly source produce from major wholesalers in Ratchaburi, Nakhon Pathom and Nakhon Ratchasima provinces, none of which have been badly affected by the recent heavy rains, she said.

“I believe the price adjustment for fruits and vegetables during the vegetarian festival will be no more than 5 per cent,” said Miss Supatcha.

Her agency is responsible for ensuring compliance with government-determined price controls on more than 200 basic consumer items.

“We have already informed all restaurant owners and food and vegetable vendors to clearly post prices for all items they sell. This is to reassure consumers they are not being taken advantage of,” she said.

Despite Miss Supatcha’s confidence, fresh market vendors say they expect to increase prices by up to 30 per cent, on average.

“I know that vegetable prices will go up about 5 to 10 baht per kilogram, especially for Chinese cabbage, morning glory, pumpkin, and white gourd. At the moment, I sell Chinese cabbage for 30 – 35 baht per kilo, but I’ll probably raise it to 40 to 45 baht per kilo during the festival,” said Chaweng Lapjuti, a vendor at Downtown Market on Ranong Road.

Some vegetable vendors have also reported wholesale price increases at their source markets, which they presume to be flood-related.

“We buy our vegetables from Ratchaburi and Nakhon Pathom, where prices have already increased. We have to pay more money for the same amount of vegetables. I believe the price will be even higher during the vegetarian festival. If I don’t raise the price of the vegetables I sell, I won’t be able to survive, said Ms Nittaya Pantawong, another vendor at the privately-owned Downtown Market.