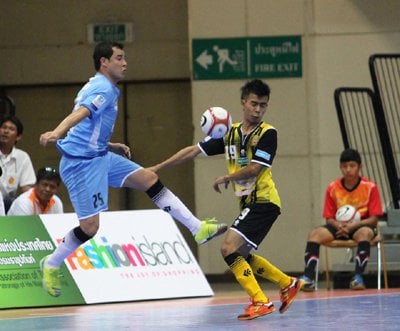 The match was one of eight held on Wednesday and Thursday as part of the unofficial GMM 2012-2013 Thailand Futsal Premier League kickoff, held at Bangkok’s Fashion Island Futsal Arena.

Taking charge with a strong offensive front early on, the Andaman Pearl almost took the lead with a number of scoring chances by Nattapong Buachai, Anurak Phetluan and Bencharong Panpob, though they failed to convert.

At the end of the 20-minute half, both sides went to the locker rooms in a 0-0 deadlock.

Despite more chances at the start of the second half, the Andaman Pearl went behind with HDFC’s Ponsvan Aomyon scoring twice – first on a counter attack in the 26th minute and then from a free kick four minutes later.

The Pearl, who had controlled possession throughout much of the match, strategically executed a power-play formation, bringing their keeper out of the nets.

The move proved to be effective with Phuket finally getting on the scoreboard with a strike by Kornwit Sae-ngo, assisted by Akkadet Chuai-klai to put their side back into contention in the 34th minute.

With six minutes remaining in the match, Phuket continued to press, taking several shots on goal, including one piercing strike by Brazilian import Rogerio Moreira.

However, HDFC’s keeper Sompong Sukchuen remained composed and ensured that his side remained on top to the final whistle. (See below for other results from the Thailand Futsal Premier League.)

Though losing their first match, Phuket showed they are a new force to be reckoned with in the 16-team elite national league.

In addition to their deadly Thai arsenal, expectations are also high for their high-profile Brazilian duo – Rogerio Moreira and Jackson Santos.

Despite the hype of the long-awaited season start, league play will now take a long break ahead of the FIFA Futsal World Cup 2012, which will be hosted in Bangkok and Nakhon Ratchasima from November 1-18.

The Phuket Gazette will bring you regular updates and coverage of both the World Cup – the sport’s most prestigious event – as well as Phuket United and the Thailand Futsal League.

Other results from the GMM 2012-2013 Thailand Futsal Premier League:

Phuket Governor calls for direct flights between India and Phuket