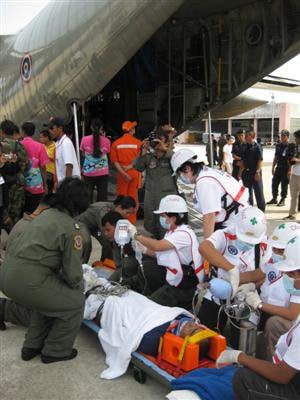 MAI KHAO, PHUKET: Five years after the tsunami that devastated parts of the Phuket coastline, authorities set out to prove that the island is ready to cope if a similar tragedy occurred today.

“Everybody took it seriously,” he said.

The exercise came as part of activities organized to mark National Disaster Prevention Day on December 26, established as such after the tsunami.

At 9:30am Gov Wichai and his wife Thaisika, who heads the Phuket chapter of the Thai Red Cross Society, were joined by other dignitaries for a short memorial ceremony at the tsunami memorial monument at Mai Khao Beach.

At 10am the simulation began, with local government offices receiving reports of a tsunami.

Seven DMATs were prepared to take care of patients, one from each hospital on the island except for Vachira Phuket, which had two.

A Staging Care Unit (SCU) was set up at the airport to take care of patients who could not be treated at island hospitals.

Gov Wichai said he was very pleased with the way the exercise went.

“Tourists coming to Phuket can be confident about our medical transportation in case a tsunami or any other disaster takes place,” he said.