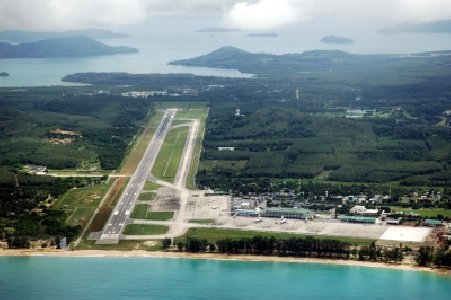 PHUKET: The 5.8-billion-baht expansion of Phuket International Airport will increase annual passenger traffic capacity to 12.5 million by 2013, Airports of Thailand (AOT) officials confirmed at a meeting on Monday.

AOT President Serirat Prasutanond said the expansion is needed to cope with steadily increasing air traffic and to cement Thailand’s status as a regional air hub.

Mr Serirat was speaking at an open meeting at Central Festival Phuket attended by appointed and elected officials, business representatives, local residents and other members of the public.

When the project finishes in 2013, the airport will be able to handle anticipated traffic through 2020, he said.

Air traffic and passenger throughput have grown steadily at Phuket Airport, which is the second busiest in Thailand after Bangkok’s Suvarnabhumi in terms of passengers and people using airport services, he said.

The goal is to improve facilities to handle increasing demands on every aspect of airport services – safety, speed and convenience at the forefront, he said.

More taxiways and parking slots for aircraft are being built, as are a new international terminal, a covered car park and more roadways within the airport.

Utilities infrastructure is being upgraded overall, he said.

The airport can currently handle 6.5 million passengers yearly. When the project is complete it will be able to handle 12.5 million: 5 million international and 7.5 million domestic passengers, he said.

Another aspect of the project, which began last year, is improving air links to regional airports, thus guaranteeing Thailand’s status as the principal air hub of the region, he said.

The symposium, entitled “Developing Phuket Airport Together for Greater Progress”, was organized by the AOT and presided over by Phuket Governor Wichai Phraisa-ngob.

The aim of the meeting was to trade ideas about what kinds of improvements and development should be carried out to satisfy all parties.