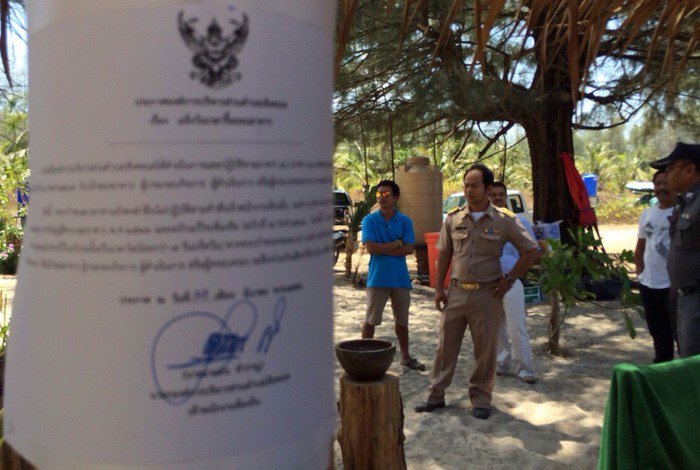 PHUKET: The controversial president of the Cherng Talay Tambon Administration Organization (OrBorTor) yesterday shrugged off a 10-million-baht lawsuit filed against him for alleged dereliction of duty.

“The owners of two establishments, named Beach Bar and Paul Restaurant, located on Laypang Beach are claiming that I ruined their businesses,” OrBorTor President Ma-ann Samran told the Phuket Gazette.

The two restaurants were on a list of businesses that were allegedly encroaching on public beaches in the Cherng Talay area. These charges were levied following an order from the National Council for Peace and Order to demolish all illegal beach businesses on the island.

The Navy, in conjunction with local officers, has demolished dozens of bars, clubs and restaurants that were encroaching on public land in the area, explained Mr Ma-ann. These two restaurants were not demolished, but were forced to close their doors for a number of months.

“These places are still standing. Additionally, vendors have already started to move back onto the sands,” Mr Ma-ann said. “I’ve strictly followed orders. I have nothing to worry about. I’ll see them in court.”

A judge will hand down the sentence on December 2.

Another restaurant owner filed a dereliction of duty case against Mr Ma-ann after receiving a demolition order against his business, Tony Restaurant.

Mr Kanokpon’s lawyer, Lapat Karnwijit, explained that construction of the restaurant had initially started in 2013 and did not have a permit at the time. On December 15 of that year, the Cherng Talay OrBorTor sent a notice asking that construction be stopped and a letter requesting the building permit be submitted within 30 days.

“My client paused construction and filed the letter on December 23. However, we never received an update. When we followed up, the OrBorTor said that three unknown men had presented themselves at their office and withdrawn the letter, which is just unbelievable.”

The restaurant opened in January and received the demolition order that same month. However, the Navy-backed demolition was put on hold by request of the Ministry of Interior. An urgent letter from the Ministry asked for additional time to review the land ownership document supplied by Mr Kanokpon, raising questions among the public as to why the Ministry would intervene in this particular matter.

Local government officers allege that the NorSor 3 Kor document presented was voided about 30 years ago.