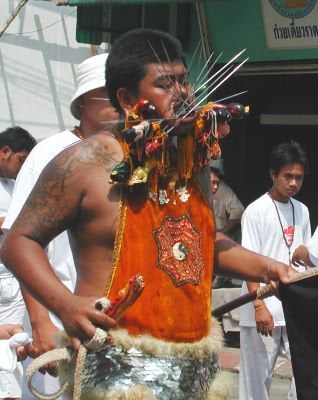 PHUKET CITY: Tonight marks the end of the Phuket Vegetarian Festival 2004, when believers will bid farewell to thousands of Chinese warrior gods as they return to their celestial realm.

Sending them on their way at 10 pm will be the explosions of no fewer than a billion firecrackers, according to the official Tourism Authority of Thailand (TAT) guide to the festival.

The center of activity will be Lan Nawamin Square on Phuket Rd. The road will be blocked all the way from there to Saphan Hin for the festivities.

Suwalai Pinpradab, Director of the TAT Region 4 Office in Phuket, said this year’s festival has been a great success, with more tourists than ever attending, both from other parts of Thailand and from abroad.

She estimated the income generated by the event at 1 billion baht – or one baht for each of tonight’s firecrackers.

“We have had [ethnic Chinese] from Malaysia and Singapore coming in big groups to make merit at Chinese shrines and take part in other activities. Hotel occupancy rates in Phuket Town reached 100% over the last four days.”

Greater awareness of the festival in those countries and increased availability of package tours was largely responsible for the dramatic numbers, she said

Following the departure of the deities at about midnight, believers will spend the night reveling in the activities that they have denied themselves over the past 11 days – eating meat, drinking alcohol and, perhaps, with luck, a little intercourse.

Patong Carnival to go ahead