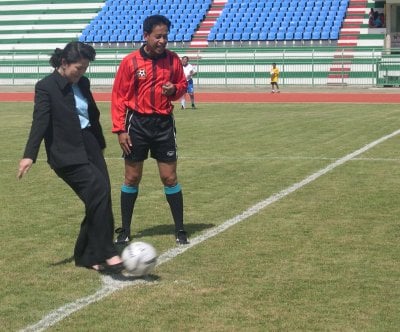 PHUKET: The President of the Provincial Administration Organization (OrBorJor), Anchalee Vanich-Thepabutr, has denied allegations that Surakul Stadium is for the use of Thais only, though the OrBorJor has rejected a request to hold the Phuket International Soccer 7s tournament, planned for November, in the stadium.

“I know the organizers of the Phuket International Soccer 7s competition would like to hold it in Surakul Stadium. But the competition will last two whole days and will consist of many matches. That could damage the field, so we cannot permit it.

“If it is only for one day with a couple of matches involving two or four teams, however, then maybe we can allow them to use the stadium,” K. Anchalee said.

When asked whether there was an anti-foreigner policy in allocating use of the stadium, K. Anchalee replied that the OrBorJor would carefully examine all requests to hold soccer tournaments at Surakul Stadium from both Thais and foreigners.

She added, however, “If the schedule is full or there is more than one request to use the stadium on the same date, then domestic users will be given priority.”

K. Anchalee cited the Senior World Cup, held in April of this year, as an example of the stadium being used by foreigners.

She explained that she is not normally involved in the decision-making process; a committee led by OrBorJor Vice-President Suthep Thepsakul manages the schedule for the stadium and decides whether to permit tournaments to be held there.

She added that match days at the stadium are followed by a few days of no play, to allow the grass pitch to recover. Anyone requesting to use the pitch during these rest periods would be turned down. This, she surmised, might be the reason why some requests for use of the pitch by foreigners have been rejected.

Commenting on the controversy over the international Rugby 10s tournament earlier this year, which was also denied permission to use Surakul stadium, K. Anchalee explained that the OrBorJor had a no-rugby policy due to worries about it damaging the turf.

“We didn’t even allow the Ministry of Justice to play rugby on the field,” she said.

The OrBorJor did allow matches in the world’s first international 80-80 rugby tournament to be played at Surakul in August last year, though the Gazette understands that this was only after pressure from the Ministry of Tourism and Sports.