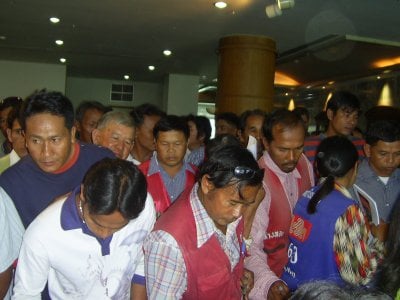 PHUKET CITY: Motorcycle taxi drivers in Phuket will have to be registered and fitted with yellow license plates from May 11, it was explained at a public information seminar at The Metropole hotel yesterday.

Regulation 13 of the Car Act of 2004, which includes clauses aimed at regulating motorcycle taxis, will come into force on May 11, Phuket Provincial Transportation Office (PPTO) Chief Technical Officer Teerayuth Prasertphol said, adding that registration of motorcycle taxi drivers would start on that day and would continue until September 7.

He explained that motorcycle taxi drivers operating unlicensed after that date could face a fine, which has yet to be set.

K. Teerayuth added that the PPTO would offer training courses for those wanting to become motorcycle taxi drivers, starting from the beginning of May.

“Licensing is a good way of controlling the ever-increasing number of motorcycle taxis,” he said.

“It can only help to increase passenger safety if we have personal information on each driver – and it makes it easier for us to prosecute them if they should injure a passenger.”

PPTO Chief Suraphon Tanrungruangthawee said that in February statistics indicated that there were 3,483 motorcycle taxis operating from 303 win – or groups – around Phuket, although he added that the numbers are increasing all the time.

Col Jirasak added that the provincial authorities had tried, and failed, to control motorcycle taxi drivers, but as the authorities now had the backing of the law, this should be easier to do.

One motorcycle taxi driver, who asked not to be named, was unhappy about the cost of registering.