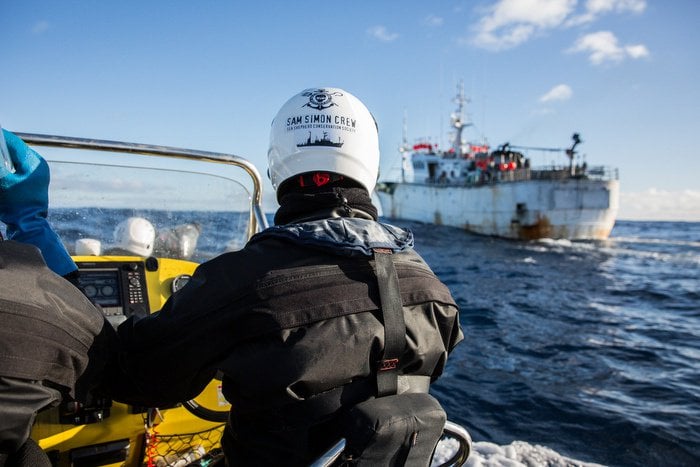 PHUKET: A joint task force in Phuket has seized one of six known illegal, unreported, unregulated (IUU) vessels wanted for fishing for toothfish in the Southern Ocean after it falsely reported and offloaded its cargo.

The ship, which recently had its name changed from Kunlun to Taishan, had already fled from the navies of New Zealand and Australia, as well as global conservation organization Sea Shepherd, before passing through Indonesian waters and mooring near Phuket.

In January, Interpol issued a Purple Notice against the Taishan for illegally fishing for toothfish inside an area regulated by the Convention for the Conservation of Antarctic Marine Living Resources (CCAMLR).

“The only successful outcome of this arrest would be the seizure of the vessel,” Capt Siddharth Chakravarty of the Sea Shepherd ship Sam Simon told the Phuket Gazette.

The Sam Simon is taking part in the Sea Shepherd 2014 Operation Icefish, a campaign to stop the illegal fishing of Patagonian and Antarctic toothfish in Antarctic waters.

“There is evidence against the Kunlun of multiple crimes, including fishing without a permit, using banned gill-nets in a controlled fishery zone, changing flags and names to deliberately avoid detection and operating under shell companies as fly-by-night operators to exploit international loopholes,” explained Capt Chakravarty.

“She is sure to have human-rights violations as well on the contracts of the Southeast Asian crew she employs, and I urge the investigators to look into the human and the environmental crimes of the Kunlun. Thailand has the opportunity to make an example of the Kunlun and rid the country’s ports of IUU fishing fleets.”

Over the past decade, Southeast Asia has been a hotbed for IUU operators, with them launching and ending their Antarctic fishing seasons from the ports in these countries, he explained. Indonesia has recently sent a very strong message to the poachers by blowing up multiple illegal Vietnamese vessels, and Malaysia has arrested and fined vessels in the past.

“The captain of the Kunlun definitely miscalculated the extent of the refuge he would be granted in Phuket, Thailand,” Capt Chakravarty said.

The vessel was seized following a jointly-coordinated operation between Phuket authorities, Interpol and law-enforcement authorities in Australia and New Zealand.

“Australian authorities contacted the Customs Department asking that the contents from the Taishan be examined due to allegations of illegal fishing,” a high-ranking officer from the Royal Thai Navy Third Area Command, who asked not to be named, told the Gazette.

“The Taishan was delivering seafood products. It arrived at the Phuket Deep Sea Port at the beginning of March. The vessel passed through customs with no issues, as they presented all the legally required documents.”

However, after the notification, authorities recalled the shipment from Songkhla and discovered that the ship had falsely reported which kinds of fish products were being delivered.

“Toothfish are the sharks of the deep. If the world knew more about a fleet of six vessels poaching vulnerable shark populations in a managed fishery zone, there would have been public outrage and the vessels would have been apprehended instantly,” Capt Chakravarty said.

“But typical of humankind’s approach to the oceans, ‘What cannot be seen, cannot be a problem’, these vessels have been allowed to operate for a decade in complete violation of the conservation measures in the Southern Ocean.

“While the market for this fish is high-end restaurants in Europe and the United States, the gateways to those markets lie in Southeast Asia. Consumed as a delicacy in these markets, the operators earn millions of dollars from the catch of one vessel alone and those sums of money, along with the blind eye that has been turned toward them, means they have continued to exist for the past decade.”

The vessel owner, Stanley Management Inc, was contacted, as was the local handler South Services Co Ltd, to determine their role, if any, in the deceit at customs, said the investigating officer at the Phuket Customs Office, who declined to be named.

“The alleged illegal fishing took place outside of Thailand’s waters. It is beyond our authority to investigate those maters,” the officer said. “It is under International Law, so we expect international support in dealing with this case.

“Representatives from Interpol have yet to arrive, so at the moment we are simply detaining the vessel and investigating the false reporting with regards to the fish product.”

All 36 people on board the vessel – the Peruvian captain, four Spaniards and 31 Indonesians – have yet to face any charges, but are under watch onboard the ship.

One Spaniard was removed from the ship before it was seized due to self-inflicted wounds over alleged family issues (story here). According to a Sea Shepherd report, the Taishan is believed to have links to the Spanish organization Vidal Armadores, which has all but been convicted for countless allegations of operating fleets of illegal fishing vessels.

The Taishan is one of three IUU vessels intercepted by Sea Shepherd in January.

The Sam Simon intercepted the Taishan, then named the Kunlun, along with the Yongding inside the exclusive economic zone (EEZ) of Australia and well within the controlled waters of the CCAMLR in January.

“The vessels were not engaged in fishing when spotted, but were in transit to the fishing grounds after a spell of bad weather,” Capt Chakravarty said.

“However, the photos and the visual sightings confirmed the vessel’s identity, the presence of banned gill-nets on board and the immediate attempt of the vessel to flee from the fishing grounds without responding to any radio calls by me.”

Sea Shepherd ship Bob Barker has been in pursuit of another poaching vessel, Thunder, since December 13, making the pursuit the longest sea chase of a poacher in history.

“By shining the spotlight on these operators and by intercepting their operations, an international web of enforcement is quickly being cast on these vessels. To now see one of the vessels being apprehended is the reward we have been waiting for,” Capt Chakravarty said.

“This is the first instance where governments, non-government organizations and Interpol, along with local authorities, are acting in concert to end IUU operations on the high-seas.

“This heralds in a new dawn for the enforcement and the prosecution of fishing crimes and a successful seizure of the Kunlun would help Thailand set a benchmark in international investigations into IUU fishing operations.”