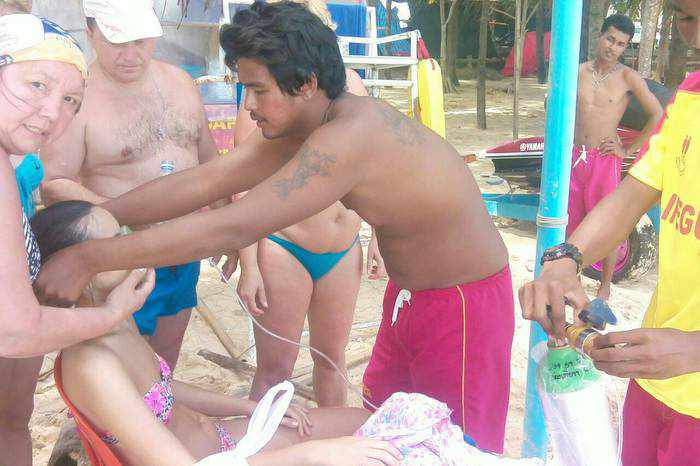 PHUKET: A 24-year-old Russian woman was rushed to hospital today after being stung by a bluebottle jellyfish while swimming at Nai Thon Beach, off Phuket’s west coast.

“At about 12:30pm we heard a woman screaming. We helped her out of the waist-deep water and found a bluebottle jellyfish stuck to the back of her hand,” Jit Chairap, head of the Nai Thon lifeguards, told the Phuket Gazette today.

“We removed the jellyfish, but then the woman started having trouble breathing, so we administered oxygen while waiting for the ambulance to arrive.”

The woman, Dinara Khayranova, was rushed to Thalang Hospital and discharged after receiving treatment.

Lifeguards have issued a warning to swimmers in the area, as the bluebottles, also known as Portuguese man ‘o war, have been seen in Nai Thon waters often this season.

“We have warnings on the beach urging people to beware of jellyfish, said Mr Jit.

“So far, Nai Thon is the only beach where bluebottles have been spotted. We have collected about 20 in two weeks.”

Experts from the Phuket Marine Biological Center (PMBC) have provided lifeguards with a formaldehyde-filled tank in which they can store any rare jellyfish they find on the beach, explained Mr Jit.

“They come collect the tank once a month,” he said.

The bluebottle can be seen floating near the surface of the water, said Phuket Lifeguard Club President Prathaiyut “Nut” Chuayuan told the Gazette.

“This kind of jellyfish is common here during this season,” he said.

When bluebottles washed ashore on Phuket beaches at this time last year, PMBC marine biologist Charatsee Aungtonya cautioned that “Unlike with jellyfish stings, people stung by bluebottles should not pour vinegar on the wound. This can make it worse.

“Instead, immediately wash the wound with lots of seawater followed by lots of very warm water. And seek medical assistance as soon as possible just in case,” she urged (story here).