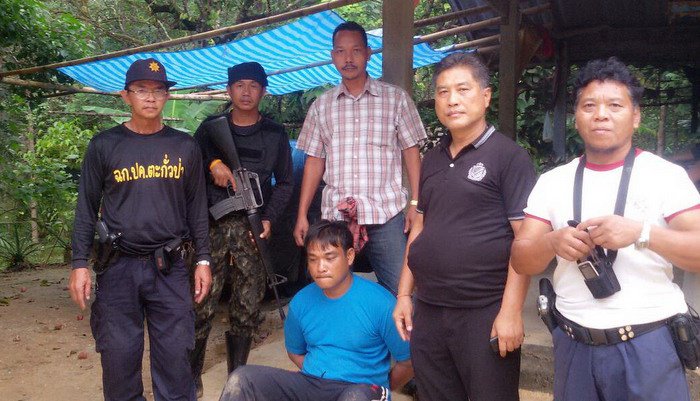 PHUKET: Corrupt Thai officials allegedly accepted bribes of about 300,000 baht per truckload of trafficked people in order to allow smugglers past checkpoints, it has been revealed.

The revelation comes after police on Tuesday arrested two of three men who attempted to smuggle more than 50 Rohingya through Takuapa, Phang Nga, north of Phuket, to Malaysia on Monday (story here).

Officers found Rittidej Kongsong, 33, from the Thai border province of Ranong, and Wirat Kulkij, 45, from Phang Nga, hiding in a local villager’s house.

“Mr Wirat confessed to us that he had smuggled migrant workers through Thailand at least twice before,” said Takuapa District Chief Manit Pianthong.

“Each time, there were more than two vehicles involved and [the traffickers] were forced to bribe government officers along the way.”

Mr Wirat told officers that to cover the costs of the bribes and operations he was paid 80,000 baht per male human-trafficking victim.

Based on Mr Wirat’s confession, Mr Manit is concerned about the potential size of the human-trafficking operation.

“For the operation to be this big, there must be many government officers in many different positions involved,” he said.

Mr Wirat and Mr Rittidej, who also confessed, were taken to Takuapa Police Station and remain in police custody.

They have been charged with smuggling people into Thailand.

“We are now hunting down the last suspect involved in the case. We will continue questioning the men in order to find out who else is involved in the network,” Mr Manit said.