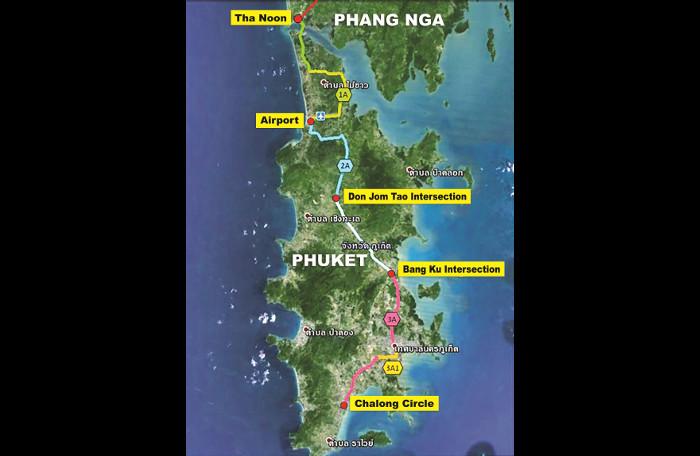 After years of talking and planning a province-wide light rail project, Governor Chamroen is ready for officials to put up or shut up.

The governor has called on the Office of Transport and Traffic Policy and Planning (OTP) in Bangkok to sort things out in his office next week or dismiss the project entirely.

“The study plan started back when I was a vice governor,” the governor said during a Phuket Provincial Hall meeting with OTP representatives last Monday. “Now, I’m the governor and it’s still not done. So that’s it. I’ve had enough.”

The estimated 23-billion-baht project has been listed in the Ministry of Transport’s 2017 Action Plan, released earlier this month. For skeptics, being listed in the Action Plan is at least an indication that Bangkok is giving the light rail project serious consideration.

“I want this project to happen,” Gov Chamroen said. “The longer we wait, the worse it gets. Now our new airport is under construction and is about to be completed in September.”

“I just want to do something for my home town,” he added. “So, I’m encouraging everyone here to just talk through whether or not we’ll end up doing it. If not, we quit; we’re not wasting any more of our time. ”

The governor’s comments come after the Ministry of Transport requested the light rail project’s plans be drawn up again earlier this month, after raising safety concerns over roadway intersections with the proposed line.

“We’ll do a workshop in my office next week,” Gov Chamroen said. “I would like to be in charge of this project so I can pass on progress reports to the Phuket people directly. I want a summary of the whole system: the route, a rough estimate of the budget, all of it.

“I have no idea what you have discussed with Bangkok. I barely had any chance to join in the meetings. What I do know is that Phuket’s projects belong to Phuket’s people, not experts in Bangkok, or the Ministry of Transport. The people of Phuket will not have that,” he told the OTP reps

“I’ve received a lot of comments and questions regarding the light rail project,” he said. “So many people have asked me what is going on with the project, and I don’t know what to tell them. I can’t answer their questions because I have no idea what exactly is going on,” Mr Charan said.

During the meeting Phuket Highways Office Director Patiwetwottisak Sookhii stressed the need for continuing safety studies and taking the time to implement the project correctly.

“I’m concerned about two things: the safety of motorists and commuters – I want to see how the platforms work, how to get on and off – and whether or not this system is going to be more efficient,” Mr Patiwetwottisak said.

“We are currently in the middle of improving our main roads and increasing their traffic capacity. We are also working on improving the safety of our road crossings. So, when we talk about intersections with the light rail system, it’s worth taking our time over.”

“Don’t get me wrong, I want to see the planners being more active,” Mr Patiwetwottisak said.

“Please fix what you are asked to fix; this is something I do not really see happening. The Department of Highways fully supports this project, but again, I would like to make sure it is safe.”

Governor Chamroen agreed with Mr Patiwetwottisak’s comments, but said he doesn’t expect the project to be completed before the end of his tenure.

“Think about it this way: what does Thailand expect from Phuket? The government expects millions of travellers to come here every year,” Gov Chamroen said. “In three years, it’s very possible we’ll be getting 18 million visitors annually.”

Suthin Uthaithamrong, a member of Phuket’s Land Transport sub-committee, offered an explanation of the repeated delays in the planning process.

“From what I’ve heard, we are very close to completing the final plans for the rail system,” Mr Suthin said. “The rail will run through Koh Kaew from Phuket International Airport.”

“The route is a main corridor and would require at least one underpass and a flyover for the project to continue,” Mr Suthin said.

“This system requires a number of projects to be connected and we have to talk through how we’re going to accomplish that, otherwise we will just be wasting our time on something that will never be approved.”

Project manager and OTP secretary Sirigate Apirat said the Mass Rapid Transit Authority of Thailand will handle the project’s budgetary concerns while the OTP applies for an Environmental Impact Assessment after final plans are approved.