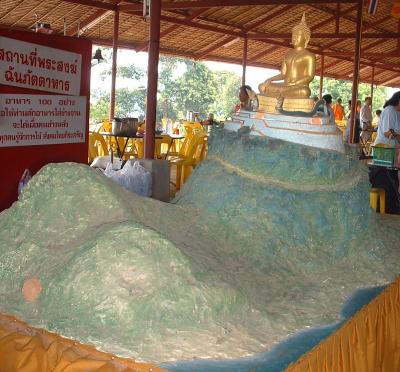 KARON: Construction of the controversial Mingmongkol Buddha image atop Nakkerd Hill will resume next month, now that the Royal Forest Department (RFD) has issued a paper authorizing work on the project to continue.

The authorization stipulates that the project remain in compliance with the original plan and that steps be taken to minimize further erosion at the project site.

Work on the project was halted nine months ago after it was deemed to have exceeded its original scope and for violating the ban on the construction of permanent structures above 80 meters. The ban went into effect in 1994 in an effort to halt just the kind of erosion that the project has caused.

Originally authorized to consist of no more than a single brass Buddha and some bathrooms, the project quickly mushroomed to include a large sala and several other structures designed to accommodate the needs of “pilgrims” and those making donations to fund construction.

Under a new design the image will be 45 meters high, and 25 meters across at its base. It will be made of reinforced concrete and covered with gold leaf.

The image is expected to be particularly spectacular around dusk, when it will reflect the dying rays of the sun. Promoted as the world’s largest gold-leaf-covered Buddha image, it is expected to become a major religious icon and tourist attraction for Phuket.

At a ceremony at the project site on Saturday, Phuket Prison Chief Panya Panatnachee presented the RFD permission paper to Suporn Wanichkul, head of the Mingmongkol Buddha project committee.

The RFD permission paper stipulates that construction now be limited to the Buddha image itself. Additional structures, including a large temporary sala and numerous places for devotees and tourists to make merit and give donations, must be removed from the site once the Buddha image is completed. The RFD paper also stipulates that trees be planted in the area to prevent further soil erosion.

K. Suporn said his committee was satisfied with the state’s decision and said that full-time work will resume in August. He said that herbs and native trees would be planted in the area.

It was not reported if these will be of the same species as the stands of virgin forest that were felled to make way for the project and the access road leading to it.

However, K. Suporn said his committee intends to continue lobbying the government for the right to build more permanent structures at the site, “should they be required to meet the needs of tourists who visit the site”. These would included accommodation for monks and a permanent sala, he said.

In fact, a brochure soliciting donations for the project, which is still being widely distributed in Phuket, reads, “There will be a meditation center when the development is completed.”

K. Suporn added that the project will be completed within two years.

“Money collected [from donations by “pilgrims” and tourists] will pay for the upkeep of the image,” he said.