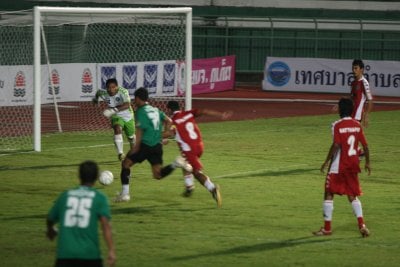 PHUKET TOWN: FC Phuket continued their undefeated run with an imperious 5-0 victory over a flimsy Ranong squad at Surakal Stadium on Saturday.

FC Phuket have won every home match this season, giving their fans, who continue to grow in numbers with each game, plenty to sing about.

With midfield linchpin Diarra Ali injured, striker Chakrit was recalled, while Poramut played on the right wing and Sarach was moved into the middle to partner Camara.

FC Phuket’s two African players played a major part in both of the opening goals.

The first goal came as Pongsak lofted a free kick into the Ranong box from well within his own half and Nene Bi rose highest to head the ball home. It was the defender’s first goal of the season and well deserved by the Southern Sea Kirin who dominated early play.

The second, scored deep inside first-half stoppage time, was arguably the most impressive of the season. Nene Bi looped in a free kick to Camara who sent it on to Chakrit. With his back to goal, the striker found the back of the net with a superb bicycle kick.

The only disappointment for FC Phuket was an injury to top scorer Adisak.

The second half saw Ranong capitulate in the face of a commanding FC Phuket performance.

The third goal arrived shortly after the break when substitute Nattupol, who had replaced the injured Adisak, headed home a corner.

Chakrit buried another ball after the Ranong keeper failed to hold a fierce shot to make it 4-0.

FC Phuket were cruising and Manager Arjan Songsammsub was sufficiently confident to give their reserve goalkeeper a run out with 20 minutes to go.

Ranong were unable to test FC Phuket’s second string keeper. Claiming the final goal of the game, Nattupol burst clear on the right wing and scored a sumptuous lob from well outside the penalty area.

Center half Nene Bi was happy to get his name on the score sheet for the first time. “I thought the whole team played well today,” he said. “We have a few injuries but I think we have a strong enough squad to cope.”

Phuket to benefit from a better 2010?