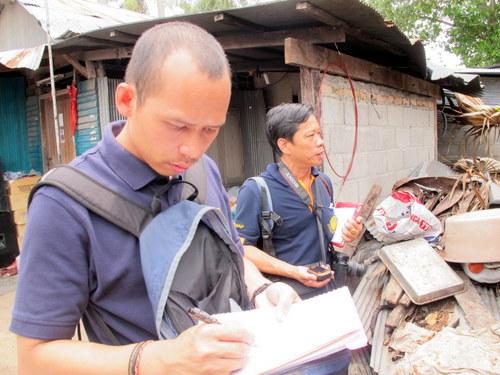 PHUKET: The Department of Special Investigation (DSI) has obtained historical aerial photographs of the Rawai beachfront dating back as far back as 1950, which may prove to be the evidence needed to save the village from being plundered by private investors.

Lt Col Prawuth Wongsinil, chief of the DSI’s Consumer and Environment Protection Office, inspected the village on Friday as part of an investigation to confirm how long the sea gypsy community has been living at Phuket’s southernmost beach.

The inspection followed the vow of Pol Col Narat Savetanant, director-general of the Rights and Liberties Protection Department, to investigate land claims to plots inside the sea gypsy village (story here).

“The Rawai sea gypsies filed a complaint, asking us to examine evidence in their village to prove they have been living in the area for generations,” Col Prawuth said.

The evidence being sought is hoped to predate land ownership documents for the area, which would invalidate ongoing claims over land plots inside the village.

The Phuket court recently upheld claims to plots within the boundaries of the village on the basis of land documents produced, a ruling that has thrown the sea gypsy community into disarray as they are now fighting court-ordered evictions (story here).

“We are going to get more aerial photographs, taken in other years. We believe they will help us determine a clearer understanding of how long the sea gypsies have been living here,” he explained.

Specialists will review the photographs to determine if any structures featured in images taken decades ago remain today, hence establishing continuous occupation of the land.

“If they can, the photos could be used to prove that the land has been occupied since the date of the image was taken,” Col Prawuth explained.

The inspection team yesterday noted details of the village and collected samples as evidence. A human arm bone was recently found at the site (story here).

“The age of the bone will be able to tell us the year that the land was occupied,” Col Prawuth explained.

“We will take the evidence we collected today to discuss with archeologists and forensic officers in Bangkok,” he added.

“The investigation is expected to take about two to three months to complete,” he said.

Theft at Phuket tax office not an inside job, police say