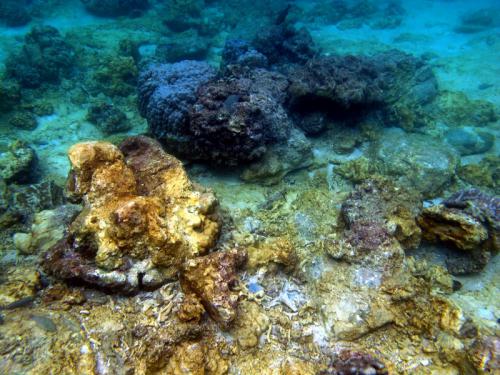 PHUKET: Many members of the Phuket diving industry stand at odds with the Phuket Marine Biological Center’s (PMBC) assessment of damage to corals at Racha Yai caused by a storm that lashed the region late last month.

“The storm that day [November 23] was not the first time corals in the area have been damaged by inclement weather,” PMBC Director Ukkrit Satapoomin told the Phuket Gazette. “Nature will soon heal them.”

Mr Ukkrit estimates that there are enough undamaged coral polyps at the bays for the corals to rejuvenate to pre-storm levels within three years.

However, many leaders in the dive industry see the damage done to the corals as a game changer.

“There is little doubt that it will have a profound effect on the industry, as this is one of the more popularly visited dive sites,” said an industry expert, speaking on condition of anonymity.

“In such a situation, it would be preferable for the authorities to close off access and allow these bays time to recover. It is now the beginning of the busiest part of the year and these sites could end up in an even worse state because of certain parties’ practices.”

The PMBC estimates that about 60 per cent of all coral at the sites was damaged. However, that estimate includes dead coral that had been destroyed previously, either by dropped anchors or coral bleaching.

“Being damaged by the waves does not mean they are all dead. Live pieces of them can still continue to grow,” said Dr Ukkrit.

However, Sea Bees dive instructor Terry Davis, who dives regularly at the site, was shocked at what he saw after the storm.

“It’s an absolutely devastated dive site; it has become a completely different dive site. A new map will be required,” he said. “It looks like a bomb has hit, not just inclement weather.”

Mr Davis noted that groups of staghorns, fragile hard corals, had completely disappeared and that large coral blocks had been broken up and moved.

Nonetheless, another member of the local dive industry, Managing Director of Andaman Ocean Safaris David Minnaar, who describes the Koh Racha sites as his “bread and butter”, wasn’t overly concerned about the level of damage.

“There is a lot of sand in the shallower corals, but once you get deeper, where people are diving, the damage isn’t so bad,” Mr Minnaar said. “It happens… there is always something going on, it’s the life of a reef – and this reef is still very much alive.”

Mr Minnaar did mention that the shipwreck on the site was shifted by the storm, but only by a few meters.

“We go there every day. If anyone was going to be worried, it would be me, and I’m not worried at all,” he added.

Mr Ukkrit from the PMBC told the Phuket Gazette that he was open to coral-rejuvenation projects to help return the site to its previous condition, but had no such projects planned at the moment.