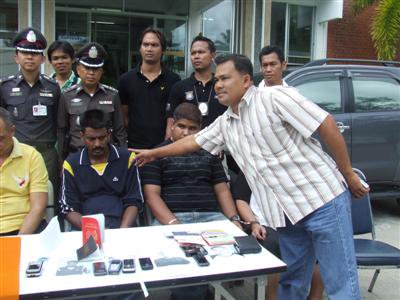 The men, three Thai nationals and three foreigners, are alleged to have been involved in a scam in which fake passports were used to rent cars, which were then to be sold in Laos.

At around 2 pm that day, officers arrested Malaysian nationals Jonathan Raj and Abdul Rhani at a car rental shop near Phuket Airport. Both were carrying fake passports and driving Toyota Fortuners. Inside each vehicle police found 25,000 baht in cash.

The two men said they were acting under the orders of another Malaysian national, Mr Tan Tiong Hee, who they claimed supplied them with the fake passports.

They said they had used the passports to rent the cars, which they planned to drive to Laos to sell.

Police arrested Mr Tan when arrived at the rental shop later that day. He told police he had arranged to deliver the cars to other men in the car park of the Royal Phuket City Hotel.

The three men denied the charges of receiving stolen goods, stating they had been paid 10,000 baht each by another man, who they named as Mr Wiroj (surname unknown), to drive the cars to Bangkok.