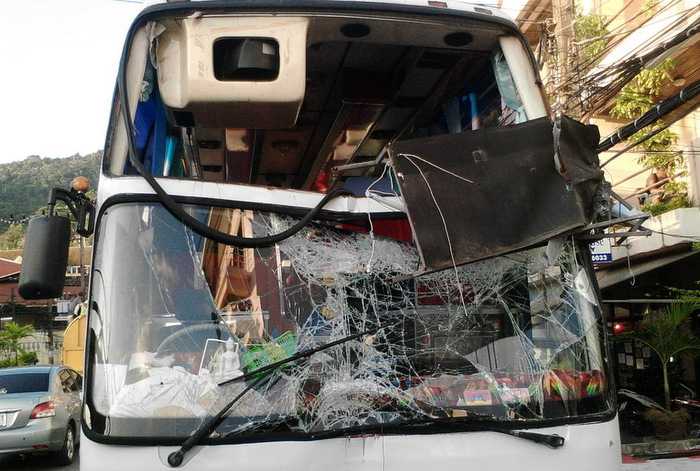 The driver Pirom Joppromraj, 49, told police that the brakes failed as he descended the steep slope into Patong at about 5:15pm – during big vehicle restricted hours.

A Patong Hill bus ban was put in place in February and bars buses and large trucks from crossing Phuket’s most infamous hill from 6am to 9am and 4pm to 7pm (story here).

“Mr Pirom said that he was on his way back from picking up tourists in Phuket Town to take them to their hotel in Patong,” said Lt Sileenart Cherdchutrakulthong of the Patong Police.

“However, the brakes failed as the bus came down the hill. He told us that he crashed into the two parked motorbikes and the wall of Wat Suwan Kiriwong to bring the bus to a stop.”

Mr Pirom was taken to Patong Hospital with glass cuts on his left arm.

“It was lucky that the crash did not seriously injure anyone,” said Lt Sileenart. “Only three tourists on the bus suffered minor injuries and were taken to Patong Hospital. The rest of the tourists were safely delivered to their hotel later on.”

Dharmmachart Limited Partnership, which is responsible for the bus, has compensated the motorbike drivers for the damage, said Lt Sileenart.

Though Mr Pirom claims that the crash was caused by brake failure, police have not ruled out charging him with reckless driving causing damage to property.