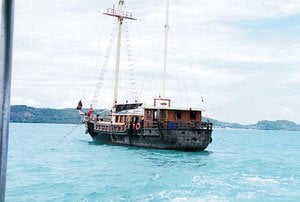 AO CHALONG: Phuket Marine Police and the Economic Crime Investigation Division seized a boat on Saturday following allegations that it had been imported illegally into the country to avoid paying import taxes. The seized boat, a 25-meter wooden yacht named “Anusara”, was estimated by the Marine Police to have a market value of around 16 million baht. According to its registration papers, “Anusara” belongs to a Thai company called Leewards. The boat is registered for commercial use for giving tours. The police checked with the Harbor Master and found that records there list “Anusara” as being built in Thailand. Upon further investigation, however, the police found evidence that the boat had been built in Indonesia, and that the registration papers may have have been forged to make it appear as though it had been built in Thailand. On board the boat, police found a German national who is a shareholder in the company. As he was not registered as the owner, police did not arrest him, but they told him to inform the company to bring papers proving the boat’s origins to the Economic Crimes Investigation Division in Bangkok. The boat, in the meantime, will be docked at Rattanachai Boatyard in Koh Sirey. Pol Lt Col Thawat Pinprayong of the Phuket Marine Police said that there is a group of businessmen, both Thais and foreigners, who have been bringing boats into the country illegally and avoiding paying taxes by getting forged registration papers. They then use these boats in tour businesses. Since October 2000, the Phuket Marine Police have seized 19 boats, and say that they are currently investigating “many other boats” suspected to have forged documents in order to avoid tax.