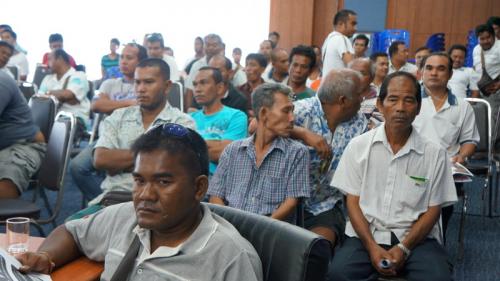 PHUKET: Tuk-tuk and taxi drivers in the southern beach resort areas of Kata and Karon yesterday vowed to stage protests if the new Phuket bus service from the airport is launched.

Local police, however, said plainly that road blockades would not be tolerated.

The news came at a two-hour meeting held to resolve the conflict between the local drivers and the new bus service, which the drivers claim will greatly affect their income.

The tuk-tuk and taxi drivers refused to negotiate, and their threat of action was not veiled.

“You launch the bus, we will definitely block the road,” Sommart Homwan, president of the Kata-Karon Taxi and Tuk-tuk Driver’s ‘Co-operative’, said.

About 100 tuk-tuk and taxi drivers showed up at the meeting held at the Karon Municipality office in order to strongly oppose the proposed bus service from Phuket Airport to Kata-Karon (story here).

Despite rumors that other residents and business owners from the Kata-Karon area would join the protest meeting, the tuk-tuk and taxi drivers were the only voice to be heard.

The drivers’ flat refusal to approve any form of airport bus operating on their patch only strengthened the resolve of Phuket Land Transportation Office (PLTO) chief Teerayut Prasertpol to launch the bus service.

“I will report the drivers’ rejection today to Phuket Governor Maitri Inthusut and Phuket Vice Governor Chamroen Tipayapongtada,” he said.

“I even proposed to the drivers that the last bus stop to be at Karon Circle. They refused to accept even that,” he added.

Mr Teerayut was adamant that he would see the bus service begin. “There are only a few hundred people who are against the new bus service. What about the thousands of others who need it?” he asked.

“My job is to get public transportation for the people. I must get it done. There are a lot of things to do to get this service running, and although I cannot yet confirm when it will begin, I will now push for it even harder,” Mr Teerayut said.

The meeting yesterday was called by Vice Governor Chamroen Tipayapongtada after he publicly expressed his fear of violent attacks against the bus operator (story here).

Long known for using fear and intimidation as negotiation tactics, the tuk-tuk and taxi drivers in Kata and Karon on January 3 staged a blockade of the Karon beach road to protest Russian tour operators not using local drivers to transport tourists. Among the complaints was that the Russian tour operators were undercutting local tuk-tuk and taxi fares.

Their reputation this week remained intact after a promotional journey for the new bus service – from Provincial Hall in Phuket Town to the site of the proposed bus stop at Karon – was called off at the last minute on Wednesday after the organizers realized that Phuket Governor Maitri Inthusut would not be on board for the trip.

Governor Maitri was busy attending a meeting to outline the alcohol-free water-play zones for Songkran, and to announce the dates of the annual Seven Days of Danger road-safety campaign for the upcoming holiday period (story here).

Calling off the promotional journey may have been prudent, as only days earlier Kata-Karon Taxi and Tuk-tuk Driver’s Co-operative president Sommart told the Gazette bluntly: “You run, we protest.”

“The bus will serve a long route from Thalang to Kata, Karon and Patong. Think about how many customers they are going to steal from us,” he added.

Mr Sommart was confident his drivers would receive support from fellow tuk-tuk and taxi drivers in Patong.

“Believe me, not just our drivers disagree with the service, drivers in other areas do as well because it will affect all of them,” he said.

“If you were a taxi driver who used to pick up passengers in Patong, at Phuket Airport, Kata and Karon, how would you feel if one day this bus comes and you suddenly lose your customers?” he asked.

However, the top representatives of the two largest tuk-tuk and taxi co-operatives in Patong this week told the Gazette they will stand aside if the provincial authorities support and approve the new bus service.

Preechavude “Prab” Keesin, son of Patong Mayor Pian Keesin and head of the Patong Taxi Federation, said, “I do not think our drivers will protest the airport bus service. I believe our 500 members will surely understand if the Phuket Transportation Office explains to them clearly why the bus was approved and how it will be beneficial to the tourism of the island.

“We, Patong people, we are understanding. We live in a tourism destination. What we want is to develop our area to make it attractive to tourists and support the tourism economics of Phuket. We do not want to do anything that will tarnish Phuket’s reputation,” Mr Prab said.

Setthasak Buason, president of the Patong Taxi and Tuk-tuk Driver’s Co-operative, admitted the bus service would greatly affect his members, but also said his drivers were willing to make the sacrifice for a greater good.

“I am sure our 300 members will not protest. If the provincial government approves it, that means it would be beneficial to Phuket as a whole. If the bus service is approved, that means our superiors believe it will bring more advantages than disadvantages to our community, so it will be a good thing,” he explained.

However, Mr Setthasak said there were about 100 independent tuk-tuk and taxi drivers operating in Patong not accounted for by the main two co-operatives.

“I do not know how they will react,” he said.

Karon Mayor Tawee Tongcham on Wednesday was strong in his words of support for the local drivers, insisting to the Gazette he would “stand by my people” and that he was “ready to support them if they want to fight.”

“They are my people. They chose me to be their leader. When they are in trouble, I have to be with them,” Mayor Tawee said.

“It is the job of the Phuket Land Transport Office to explain to Kata-Karon tuk-tuk and taxi drivers and to hear their problems, because they will be one big group who will feel the effects of the new bus service, so their opinion should be listened to as well,” he added.

At the meeting yesterday, however, Mayor Tawee sat silently observing the discussions.

The Karon Police also said they understood the local drivers’ plight, but warned that the police’s patience extended only so far.

“We do not want violence. We will try to find a way to compromise,” Karon Police Deputy Superintendent Pachai Mattayan said.

“Blocking the road is not the answer. They have a right to protest, but not to block the road. I will not allow them to do it. They cannot make any trouble for other motorists,” he said.

“They could send their representative to talk to us, but if negotiations fail and they continue to protest, we will have no choice but to arrest them,” the police colonel warned.

Lt Col Pachai said he sympathized with the local drivers, but added the drivers should consider the bigger picture.

Theft at Phuket tax office not an inside job, police say